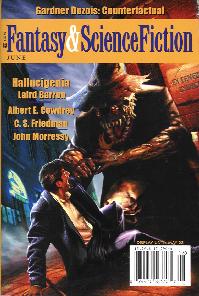 Another of F&SF regular Cowdrey’s well observed, well drawn humorous tales. When Henry Greene’s partner leaves him, he picks up a stray dog from the local kennels. When said dog turns, on the full moon, to a foxy babe, you would reckon that Man’s Best Friend would indeed be his dog. However, Henry’s is otherwised inclined, and so his were-dog fixes him up with someone more to his liking. And it transpires that the local vet is much more to Henry’s taste, although this man too has a slight change of character come the full moon. Not quite a shaggy dog story.

‘All-Star Zeppelin Adventure Stories’ edited by David Moles and Jay Lake in 2004, included the well received ‘Biographical Notes to “A Discourse on the Nature of Causality, with Air-planes”’ by Benjamin Rosenbaum (online here), was cracking story, in an alternate Earth where the narrator is a writer of ‘shadow history’. I mention this here partly as I’ve read this story but not reviewed it, and also because Dozois’ story is along similar lines, an alternate Earth in which, as recognised in the story, the outcome of the American Civil War is a different one, and the narrator is a journalist who has a sideline in writing scientifiction and counterfactual stories. Dozois’ alternate timeline is an altogether subtler variation on the ‘other side won’ argument, and there were doubtless some touches that I, not being American, didn’t pickup.

The Dozois story is so well done in terms of characterisation and setting that it’s almost possible to overlook the quality of the writing, and the subtlety does rather throw into relief the clunkiness of a lot of other Alternate History (not that I read much of it).

Tim McDaniel. Why The Aliens Did What They Did to That Suburb of Madison, Wisconsin.

Rather than aliens kidnapping humans and subjecting them to sexual depredations, one alien finds itself in the clutches of a young couple who have pretty much explored all there is to explore with regard to sexuality, and that despite its very alienness, the young couple are more than up for some xeno-sexual First Contact.

A horror story that starts dark, and gets darker and darker. Wallace Smith is a wealthy man with a beautiful wife, but all this is taken from him when their chauffer-driven Bentley breaks down in the middle of nowhere. His wife, Helen, wanders off, and they find themselves in a dark barn, with something very, very unpleasant in there. His wife ends up badly brain-damaged, and he himself has his hip broken. We follow him as he tries to come to terms with what happened, and his research into the very, very strange family who owned their barn, and the long, very long dark history.

Baird serves up a Lovecraftian dose of the creeping, mostly unseen, horrors which will stick in the memory, with the matter of fact reporting of past horrors being particularly chilling (the front cover gives a slightly more in-your-face horror than the story delivers), and a family whose members make Hannibal Lecter look like a Sunday School teacher.

John Morressy. The Protectors of Zendor.

Barron provides the main substance for the issue, with Cowdrey, McDaniel, Friedman and Morressy providing an altogether lighter repast than his fayre. Dozois shows some of the moves with which he graced SF before he became primarily an editor, auguring well for the future.