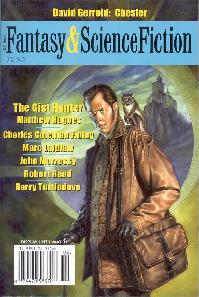 Charles Coleman Finlay. Of Silence and the Man at Arms.

The third adventure involving Vertir and Kuikin (‘For Want of a Nail’ F&SF March 2003, ‘After the Gaud Chrysalis’ F&SF June 2004). Of the first story I wrote : ‘A wry cod-fantasy yarn, in which a wise-cracking pair of thieves go a-robbing.’.

Reed appeared in last month’s issue with what I referred to as ‘a minor piece’, and ditto this. A short story in which we, and a near future community, are led to believe that a resident poet is about to create a work of art through the medium of snow. It transpires that she has other plans, which are revealed at the end, which is somewhat of a let-down IMHO.

A short lyrical piece in which a pair of lovers consider their natures – he a magician aware that to be so is to be imperfect, and she a tiger who has to feed on human hearts to maintain her very self.

Gerrold ratchets up the tension in a horror story about a widowed husband and his now motherless daughter finding that the night terrors are perhaps more than psychological. But he stops the story at a totally inconclusive stage in the proceedings. I mean, I would never stop a review in the middle of a

A fairly minor piece of satire (Satirelite perhaps?) in which their mutual need is taken to the extrement and George W Bush Jr and Osama Bin Laden get married.

I personally would prefer to see a somewhat more trenchant piece of satire, to do justice to the 25,000 Iraqi civilians, and >1,000 US troops now dead after the illegal invasion of Iraq, carried out primarily due to business interests.

A young boy is taken to a strange land underneath his house, to attain his rightful place in a land that is both a land of sweets and sugar, and also somewhat darker. Roald Dahl meets Stephen King.

John Morressy. The Legend of the Whiney Man.

A fable of three young Princes, with a slight difference, as it is a whining man in a darkly forest, who is under a spell (only broken when he is gets kick up up his sorry ass) which sorts out the Princes.

Further adventures of Henghis Hapthorne, last seen as recently as the April issue.

A reasonable F&SF issue, although I’d prefer to do without both the Finlay/Hughes stories, but would grudgingly accept one of them in an issue for those who like those story sequences. Gerrold provides a case of frightus interruptus, which is my favourite in spite of him pulling out before ensuring my satisfaction.