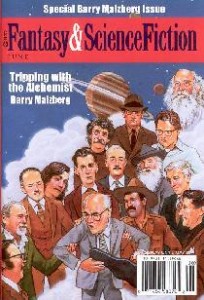 One of the occasional F&SF special issues devoted to a particular author, which I for think is a nice touch. This issue is by way of a tribute to Barry Malzberg.

John Kessel. Of New Arrivals, Many Johns, and the Music of the Spheres.

Malzberg has written a handful of stories in which the setting is ‘Writer’s Heaven’, and by way of homage, Kessel takes Malzberg’s setting and has the man himself being delivered to that location.

The new arrival finds that heaven is not a land of milk and honey, but more a number of bars full of a authors who are soused to varying degrees. The genre nature of SF causes some friction, and Malzberg finds himself ejected, in the time honoured fashion, out of the saloon doors and onto the the floor on his derriere (and there are no soft clouds to cushion the fall).

A wry, amusing story with any number of in jokes and guest appearances by SF writers both dead and not dead yet.

Daniel P. Dern. For Malzberg It Was They Came.

Aliens land, looking for answers. And those answers can only be found by Malzberg, as the questions are of an sfnal nature. They are sent away with a flea in their ear.

Short and amusing, although a bit of a one-joke story.

Bill Pronzine and Barry. N. Malzberg. A Clone At Last.

After several wry stories, a proper lengthy SF/fantasy story. And a cracker it is too.

A setting out of fairy-tale mythology, with a dark castle, a young, frightened girl, Lidia, and nasty adults.

The Fluted Girl is a strange, fragile creature, the exact nature of which we only find out towards the end of the story – she has been forced to have many surgeries and treatment that have indeed made her a human flute. The music from her, and from her sister, is a music to die for, created through an incestuous sapphic performance fit for a queen.

And the Queen is a wicked one, of course, and the young man who had loved Lidia and plotted the Queen’s downfall, but failed in its execution, is himself executed and served for dinner.

But, as with most fairy tales, there is a happy(ish) ending, and Lidia turns the tables on the evil Queen.

Sadly a posthumously published story. A fine story on which to go out on, if that is any consolation.

Vaughan poses a near-future US of A, where the States are far from united, and the country is in virtual ruin. Two sisters eke out a living diving for treasures buried in the now-flooded previously-coastal towns of Florida.

The machinations of the labyrinthine legal system (if it can truly be called a system) threaten to bring the sisters to ruin – however, their cunning is sufficient to ensure a future for them.

A girl who was swallowed by a python as an infant in a far off country, but who was saved from the slow digested death that befell her mother, who preceded her into the python, moves to America and grows up fairly normal. However, she has powers that enable her to see exactly what did happen on that fateful day in her childhood, and just what her father did (or did not) do.

A Runyon-esque story, dedicated in fact to Runyon. Strange doings in Wisconsin lead to a large yellow bird causing havoc, and all manner of things taking place.

David D. Levine. The Tale of the Golden Eagle.

I was going to start this review by commenting that if the previous story was Runyon-esque, then this one could be Cordwainer Smith-esque.

Then I spotted the mention that Levine was a recent winner of the James White Award for short SF by unpublished writers, so I checked back on my review of Nucleon, which appeared in Interzone, December 2001. I did this partly because the only recollection of the James White Award I had was a vague one of a story which I felt read as a story by a novice writer. In fact the story I was remembering was a previous White winner, for my review of Nucleon pointed out that unlike that previous story, Levine’s winning story was not obviously a first published story. But I did point out that Nucleon was somewhat Bradbury-esque.

I’m not making a fuss about any kind of pattern in derivativeness, but merely point out the coincidence.

Enough of the waffle – ‘The Tale of the Golden Eagle’ has that lyrical feel, of a story told many times over the millenia.

As in ‘The Ship Who Sang’, intergalactic travel is made possible by giving a ship a biological brain. In this case, it is the brain of a Golden Eagle. And the ship in question lives through many centuries, ending up in reduced circumstances, before it is finally recognised for what it is and rescued. The AI is made free, to inhabit the body of a beautiful, though sexless, silver body. The gambler who gambles all to win the ship finds that his financial security requires the ship to be re-equipped with a biological brain. Can he bear to inflict on the now-mobile AI a return to its non-corporeal status? Indeed he cannot, but there is an alternative. And thus the myth of the ship with the beautiful silver lady as captain is born.

A strong story, which suggests a bright future for Levine.

And, having just written the preceding I took a quick peek at Bluejack‘s review of this story, and dang it if he didn’t mention Cordwainer Smith and The Ship Who Sang in his review!

A great issue. The first half works well as a gentle homage to Malzberg, and the five non-Malzberg stories include a wowza, two hubba hubba hubbas, and two neatos. So this month, Mr van Gelder, you are not the Weakest Link, you are the Ham What Am.