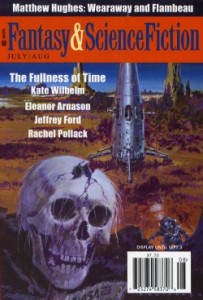 Featuring one evidently roguish wizard by the name of Raffalon.

Kate Wilhelm. The Fullness of Time.

Ford looks to the East for inspiration for a story that gradually reveals itself to be a horror story, in which all is not what it seems, and a night of passion in a remote retreat becomes a much darker affair, in which not everyone is whom they appear to be.

Contemporary urban fantasy in which a young woman is drawn, irresistbly, to a tall, dark stranger who will take her away from her humdrum existence.

A rare story from Liu that disappoints. His stories are usually smart and subtle, whereas this feels rather clunky.

It explores the issue of affirmative action in employment, but chooses a sledgehammer approach – hi-tech masks that disguise the wearer’s face and voice, making employment interviews focus entirely on the content of the application, rather than the applicant’s race. Issues are discussed, but it feels more like a story written 50 years ago.

Something for zombie fans to tide you over until series 3 of The Walking Dead appears on our screen. Here the slightly twist is that the affliction to which the title refers is one that creeps up on people in old age, and has led to old people, both infected and not yet infected, being decanted to FEMA camps, where a few brave medical staff try their best to look after their needs. The protagonist is a sort of combo of Ellen Ripley and Florence Nightingale, in a story that ends up with a tense drama bound to give flashbacks to those scary moments watching TV, or opening a door in Resident Evil and seeing what awaits behind….

Rachel Pollack. Jack Shade in the Forest of Souls.

A good spread of fantasy and a touch of the horror, but not a huge amount for those of us primarily looking for SF.