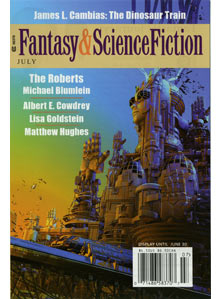 Good news for fans of Hengis Hapthorne, of whom there are many as he is evidently one of the most popular characters to grace the pages of F&SF in recent years according to editor Gordon van Gelder, in that this is another story featuring the foremost freelance discriminator of Old Earth.

Starts off, neatly, in the guise of a reader’s guide to a novel. However, the author of the guide gradually reveals themselves as having a much more major role in the monitoring of literature, as s/he chides the writer of the story in question for not quite being up to the highest literary standards. Shame on those who provide cliched plots, cardboard characters and lifeless prose!

An interesting, lengthy story, the core of which is a complex character, who we follow through three close relationships, from his time as a young man. Females are his muse, and his first significant other helps him see where he wants to go with a clear eye. He achieves success, but his obsessive nature means that work becomes his life, and Felicity has to take a subsidiary role to his architecture practice. Similarly, his second wife, another passionate affair, falls by the wayside.

Despairing of finding true love, his solution is a radical one : creating one perfect to match his needs (sadly, this is easier than addressing his problems). A production-line wife is duly created, and for a while all seems well. However, once again, the pressure of work and his driving ambition cause problems, and his solution is again to seek an external solution : this time a clone of himself. His wife, however, is so fine-tuned to his thinking, that she has come up with the same idea, and his similarly prepared another clone. With a pair of extra Roberts on hand, the original can concentrate on work again.

This is where the story slightly ebbs – there is a dramatic revelation of the fact that his wife has been unfaithful (if that is the term) with one of the Roberts (not lipstick on her collar, but a hickey on her mickey, no less). The fact that this has happened is presented as a big surprise, which is something that you would have thought would have been an option from the start.

However, the primary Robert appears to address that within himself with has been the obstacle all along, leaving him to have his wife all to himself, with the brace of clones evidently happy to find consolation in each other’s arms (incest? or self-love?)

The main character and his relationships with his three wives are the meat of the story, and the sfnal elements don’t quite work for me, with the creation of clones and freshly minted partners just a bit too straightforward, with the complex moral issues around the creationof such peoplebarely alluded to.

Short tale, a first published work, which shows it a little in setting up an intriguing, if not hugely original, central conceit, but not going very far with it. A suited character turns up at a school to see a young child who is somewhat of a prodigy. Evidently quickly assured that the child is what he is looking forward, the suit leaves, with the child bundled in a bag. As they drive away, the suit explains to the child that he is unwittingly hosting an ancient virus, bestowing intelligence on the host, but with serious consequences, both for the host and humanity. And in order to protect humanity, the virus must be eradicated.

An Alternate History, looking at one of the consequences of a German victory in the Second World War. The journal we read is from one of the feted heroes, whose use of chemical warfare caused the Eastern Front to be a success for the Nazis.

I’m not the biggest fan of alternate history, and this isn’t a particularly good example of the genre for my money. A piece of fiction with poses an alternate ending to the war purely to describe some subsequent Nazi horrors seems rather pointless to me – weren’t the horrors of the Holocaust, Hiroshoma and Nagasaki enough already?

By all means use fiction to explore the horrors of war, but I’ve read Sebastian Faulks’ Birdsong’ and ‘Charlotte Grey’, and Pat Barker’s ‘Regeneration’ Trilogy, and, trust me, you need to be writing fiction of that quality to do the subject justice.