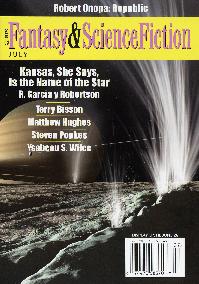 R. Garcia y Robertson. Kansas, She Says, Is the Name of the Star.

Garcia y Robertson has provided primarily F for F&SF of late through his Markovy series, and, huzzah huzzah, here he provides some SF – and how!

Co-incidentally I’ve not long finished reading Geoff Ryman’s early 90s novel ‘Was’ , which features a number of perspectives on the Wizard of Oz, including the real-life ‘inspirations’ (most definitely not Hollywood) for Dorothy, Aunt Em and Uncle Henry. And, as you might guess from the title, this setting of this story is similary inspired by L. Frank Baum’s classic, in its off-kilter Kansas.

It is off-kilter in that the story revolves around Amy who, on the eve of her 13th birthday, wishes upon a falling star. She has good reason to be wishing for her birthday not to come, as in the morning she will be old enough to be married, and a husband it to be sought for her. This is the norm in her Kansas – indeed, her father has two teenage brides in addition to her mother.

What does a girl do in such a situation? Why, run away of course! She heads off into the countryside, past the scarecrow in the field beyond which her falling star had landed with a palpable thump the night before. There are dangers on the road – Wheelers and Bushwackers – and in avoiding these she comes across her fallen star, which turns out to be a spaceship. The pilot is a monkey (a Flying Monkey of course), and is dead. The passenger, very much alive, is a girl of her own age, gingham-bedecked, and by the name of Dorothy, who is much more than she looks, but is from a planet named Kansas, who is on a mission and has to make the pickup for the return to her home.

Amy finds out that she has been living in a very constrained world – in fact her world consists barely more than the county she knows, as it is inside a cylindrical orbiting habitat. Aided by a version of The Tin Man, and a (not at all)Cowardly Lion, Dorothy and Amy effect an escape, during which Amy finds out the very unpleasant truth about her Uncle and the other local men, and resolves to return to rescue her younger sister.

A standout story, with Garcia expertly and gradually unfolding the big picture as the story develops.

A variation on an old favourite of mine – Algis Budry’s ‘Who?’. Here, in a short piece, a number of mini spy/security drones are monitoring a deposed genocidal central American dictator, who is under a form of house arrest. Or are they? for there are several identical doubles of the dictator across the globe, all similarly monitored, and all perfect copies down to DNA level. But is one the real dictator and how can justice be dispensed?

Even the clones/doubles don’t know, each having no memory other than left with them after whatever processes were undertaken to transform them. When one steps forward, like Kirk Douglas in Spartacus, and owns up to being the real deal, he is the only one so to do, and he takes the rap. This leaves the others free. But free to….?

Terry Bisson. Billy and the Unicorn.

Bisson is providing a series of short shorts in which young Billy comes across a range of mythological creatures, none of which his family can see, and which tend to wreak some kind of local havoc. Here, as the title gives away, a Unicorn.

Matthew Hughes. The Meaning of Luff.

If you like Hughes’ Hengis Hapthorn and Guth Bandar stories you’ll doubtless enjoy reading about the adventures of one Luff Imbry. If like me you are left unmoved by said stories, then you’ll probably, like me, not bother.

A follow-up to the idiosyncratic ‘Metal More Attractive’ (Feb 2004), in which Hardhands loses track of his miniature wife-to-be, Tiny Doom, and all hell breaks looks. Wilce has the stamina to maintain the creativity through a lengthy story, but you would expect this from someonet who is writing a novel called… Personally, I’d prefer the story a tad shorter.

Onopa’s ‘Geropods’ (F&SF July 2002) was a near-future dark satire which entertained. Here a more traditional SF story in which the crew of a ship seeking near-Earth planet’s the other side of a wormhole are successful, but at a cost. Whilst relatively close to humanity in certain respects, there are subtle differences between the visitors and the indiginous population, and these differences lead to the decimation of both parties.

Jerry Seeger. Memory of a Thing that Never Was.

A promising first published story – a coffee-table conversation between the last two combatants either side of a quiet was between humanity and aliens who have infiltrated Earth, which delves into the past and psyche of the human, slightly Le Carre-esque.

Heather Lindsley. Just Do It.

Another new writer, with a look at a near future in which advertising has become much more targetted – literally, as the public are shot at with darts containing chemicals which create instant demand for product. A young woman gets in with an underground resistance faction, and intends to use her close relationship with the CEO of one of the advertising companies to strike at the heart of this menace, but finds that he is in fact faster on the draw.

A good range of stories, led by Garcia y Robertson’s, and a good balance of a couple of old favourites, and new writers.