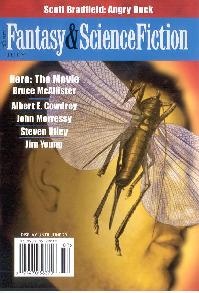 John Morressy. The Tournament at Surreptitia.

A short tale with a retro feel. A father and daughter team are downloaded as AIs into robots which are to explore the first gravitational pulsar found by mankind. On the planet circlng the pulsar they find, in double quick time, an old building, and they are visited by an alien AI. No sooner than that AI has started communicating with them, a much greater AI appears and we quickly have the story wrapped up : this second AI is part of an aeons old race whose meddling with self-aware AIs led to catastrophe. That catastrophe led to the Big Bang, and they have taken on the role of identifying any intelligent life which start to evolve AIs, and takes steps to prevent further development.

The characterisation and dialogue are a bit creaky, and the story quickly covers The Singularity, nanobots, personality uploads, Fermi and ancient intelligences controlling humanity as we reach out to the stars, all of which are being covered as much greater length, and to much greater effect, elsewhere.

A short fable featuring a duck with a poetic bent who runs fowl of academic life.

A cleverly wrought horror story, in which a mild bookshop owner is visited by someone from the past. We learn of the dark deeds done by the bookshop owner’s brother, but gradually realise that he is an unreliable protagonist, and his recall of events is not entirely accurate. Dr Bloch finds, to his cost, that the madness in the family did not die with the other brother, but is very much alive.

Mick makes up a neat little joke, which achieves some notoriety. Being confronted by someone who claims that Mick has pinched his joke is particularly problematic, as in this world intellectual property rights are paramount, and nano-monitoring of intellectual product protects and remunerates the rightful owners. Whilst Mick’s earnings from his oft-repeated joke are under threat, he is cunning enough to sidestep this minor problem.

It’s been a while since there has been one of Utley’s ‘Silurian Tales’ stories. Here a terminally ill scientist reflects on the program, and his role and his relationships, and he finally gets to visit, albeit in a reduced state. The story is a touching one, and works better than others I have read. Mind you, this may be the case that there hasn’t been a story in this sequence for a while, and that absence makes the heart grow fonder. Certainly, when the stories were appearing on a regular basis, they did come across feeling somewhat samey. As with other stories in this sequence, the sfnal element is a relatively minor element – this story could have worked just as well as a non-genre story in which the regret etc is based around, for example, an Antartic science base.

An elderly librarian is usurped from his position of responsibility by a younger tyro, giving him pause to reflect on the sheltered environment in which he has lived his life. Fortunately there are even younger ones who are ready to learn the old ways, and he can see a role in helping them, even if his time is past.

A wry tribute to the 1950s Hollywood Horror B-Movie. Rick becomes a local hero after he saves us from an invasion of monstrous insects. However, after that things go wrong, with him suffering from PTSD, and ending up on the slide. However, in the end things begin to look up, and as we are out of the 50s commie-menace period, he is able to find a fulfillment which is literally out of this world.

An issue which gets stronger the further you get in (unless you’re a fan of the Kedrigern stories). For me Utley and McCalliser where the pick of the bunch, with Cowdrey, Reed and Shultz entertaining.