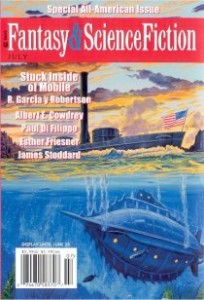 James Stoddard. The Battle of York.

Some 3000 years after the passing of America, the history of the early days of the country lives on, through a not altogether reliable mythology. Stoddard has a huge amount of fun bringing together a wide range of American icons and historical figures – General Custard, Waynejon (The Pilgrim), General Washington and his horse, Silver. You get the idea. I reckon that I got most of the references. Maybe I’m getting cynical, but I wonder home many Americans under 20 would get the references -and- be able to spot where the story deviates from what actually happened.?

I may be missing something with this story, with nine chapters, of specific, balancing lengths, which the author had set as a structure following a conversation with Bruce Holland Rogers. The story? Erm, nine views of a secession from the US.

John Morressey. A Life in the Day of Eb and Flo : an American Epic.

The story of the cartoon couple’s life in half a page.

Robertson furnishes a slightly more reliable historical story than Stoddart, albeit an Alternate History which throws none other than Jules Verne amongst the crew of a submarine caught up in the midst of the civil war.

F&SF regular Cowdrey provides a tale of revenge – a meal best served up cold. And here the revenge is a long time a-cooking, as a middle aged spinster, made infertile due to something caught from her unfaithful boyfriend, finds herself with the opportunity to provide a very appropriate viral revenge. However, her subtle plan, which will introduce a virus with deadly effects, but for, what to her are the best reasons, don’t go quite to plan.

A cautionary fairytale involving a vegetarian amongst some meat eaters, who have …. a taste for ….

The standout story for me. An adult looks back on his youth, and his best friend, who died in the explosion which disabled him. We go back with him as he relives those years, happy and painful years, as we learn more and more about what it was that happened and why. And whether history is in danger of repeating itself. A very human, very powerful story, with the sfnal element being the boyish enthusiasm for SF shared by the friends, which results in the fatal accident/incident.

A neat themed issue, with Gregory providing by far and away the strongest story.