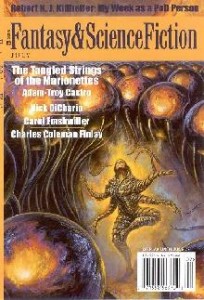 The Arthurian mythos is seen from another perspective, with the young boy who will grow up to become Sir Percival becoming involved with the faerie folk in the woods. The main characters are Howl and Pooka, two of the little people, who get caught up in the political machinations and regicide of their own folk.

The faerie story stands on its own, and the Arthurian setting is somewhat of a distraction to it.

Robert J. Killheffer. My Week as a POD Person.

I don’t as a rule cover the non-fiction content of F&SF, but this article in which Killheffer relates his experiences with Print on Demand SFF is well worth a read, if only for some of the exquisitely bad prose he quotes at times.

A short-short in which the potential horrors of digital addiction are revealed – a young man in virtually a PVS, his mind full of digital, VR, media images and info-glut.

Adam Troy Castro. The Tangled Strings of the Marionettes.

A follow up to a story from F&SF in 1997,and the lengthiest in this issue.

On the planet Vlhan the native species, often referred to by humans as Marionettes, have an annual ritual in which a hundred thousand of their species take part in a lengthy ballet/performance art which culminated in ritual mass suicide. But instead of being a single spectacle, the annual performance is inextricably linked to previous and future performances, and it is believed that there will be, eventually, an understanding, a cosmic understanding, which will reveall all.

This has intrigued many, some to the extent of seeing in what the Vlhan are doing something which can give their own life meaning. Even if finding that meaning leads to their death.

The story is taken forward through a journalist, with a bit of relevant back history himself, who watches two humans who are committed to the dance, performing in which gives them spiritual fulfillment.

A good story but without having that little extra something.

A story inside a story. Teler’s story is that of the aged time traveller from a Ray Bradbury story from the Oct/Nov 2000 F&SF.

Bradbury’s short story was that of his protagonist taking an elderly friend who has wasted his life back in time to confront his younger self, by way of warning. Teler’s protagonist is that of the elderly man who has squandered his writing talents, and we see why that has come to pass.

This story stands on its own, but works better in the context of the initial story. The addition by Teler of a quantum possibilities angle, and a seer who is capable of seeing these possibilities, gives an added dimension.

Emshwiller provides a disorienting setting – an unexplained setting, a confused protagonist who knows nothing of his previous life. What he have is some kind of ongoing war as a background, with the main character amongst a large group of similarly confused ex-soldiers, each having been wounded. Are they in a MASH or some other hospital/rehab?

A badly wounded man joins them – is he an enemy or not? One of Them or One of Us?

The protagonist, unnamed until the end, decides to leave the group, to search for something. It transpires that he has medical skills, and these are helpful in the continuing nightmare of a war in which there will be no victors.

The futility and waste of warfare is driven home, although the amorphous ‘plot’ and character leave a central gap for it to work really well as a ‘story’.

A debut story which promises much.

Coastal Maine is the setting, and Michaud introduces us to a particularly motley collection of individuals, of whom fisherman Clem Crowder and his redoubtable wife Mrs Crowder provide us with the setting. Clem finds the drownded body of a local character in the sea, but, more importantly, he finds two humongous lobsters feasting on his body.

The prospect of catching many of these lobsters is a wonderful one, but dang it if their chosen bait doesn’t run out too quickly. Fortunately Crowder has contacts which provide him with similar bait.

But of course, Crowder get’s his come-uppance when those who have been fed to the lobsters make their watery return.

A strong issue. The lengthy SF story by Castro is the lynchpin, with, to my mind, Michaud providing the best read of the issue.