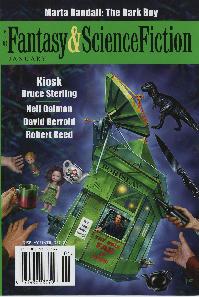 Jeremy Minton. The Darkness Between.

Subterranean horrors, as group of men, part of a Klondike-type rush to the mines under the mountains of their planet have the misfortune to be deposited by a major landslip into a deep part of the mine from which there appears to be little chance of escape. To make matters worse, they find some very nasty deep-dwelling creatures. But the true extent of those creatures’ nastiness, and the true extent to which one amongst the group is not of their ilk, is gradually explained in the dark depths.

The story runs quite quickly, throwing out a couple of major revelations, and finishes with the two protagonists poised to brave the rushing underground river which might, just might, be their way out of their situation. It feels just a little too quick and easy in terms of the set up and background, action, and then denouement.

Gerrold tells the story of a strange contact with an alien creature through the device of a letter written by himself to the editor, Gordon van Gelder. It works well, as the letter style provides a flowing narrative that has the ring of an account of something that did happen, as opposed to a story written as such and read as such.

Sterling suffers to some extent by having set himself such a high standard in his early fiction, which has two interrelated problems : continuing to write at that level; and trying to write at that level whilst being feted as a cyber-guru and having people pay you for reams of non-fiction and spending time garnering honorary doctorates and teaching at the European Graduate School in Switzerland (as we are told in the intro). Kidnap the bugger and lock him up in a garret with bread and water, I say, to get him concentrating on writing. And certainly don’t let him near Europe, else he gets subsumed in the slightly off-kilter sensibilities of that continent.

This is a sort of Eastern European KyberPunk, with the means of nanoproduction put in the hands of the proletariat, as Borislav’s basic life as a purveyor of various necessities and little luxurious through his street koisk is changed completely by the nano Fabrikator offered to him by a shady third-rate villain. However, rather than being approached by sunglass-wearing Japanese cyber-villains, as would have happened in capitalist cyberpunk, here an official from the European Union gets involved, as Sterling looks at how a different political and societal system would respond to nanotech.

One of those subtle stories that slips by gently, but manages to tug just a little at you. Mourning her lover of twenty years, Ginny is holidaying in Mexico. A day trip out to sea, to see the whales, is facilitated by a young boy, who seems to have a bigger hand in the appearance of the whales than would seem possible.

Neil Gaiman. How to Talk To Girls At Parties.

As a teenage boy, most girls seem almost alien creatures. Here, two boys on the pull in North London think that they might have struck lucky in finding a party with some very attentive girls. However, there is a bigger gap between them than is normally the case.

A new member of the cross-country club sets up a race with cash prizes, which his fellow runners happily enter. However, they are for the most part extremely put out at his, erm, peculiar route-setting. They’re cross. However, it transpires that rather than being cross, they should see it as having been a plus.