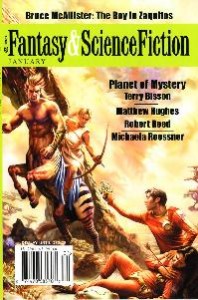 Robert Reed. Less Than Nothing.

Reed further develops the story of the boy Raven, one of the dwindling numbers of The People, who live mostly alongside but hidden from everyone else. Here the ghost of a neighbour who he killed in a previous story comes back to haunt him, and he has to seek help from those from whom they normally hide. In doing so he finds out more about himself and the links between himself and those normally regarded as demons. A subtle tale in a series that is growing stronger as the world it describes develops, in contrast, to my mind, to some of the story series in F&SF when tend towards the ‘further adventures of..’

I’ll read this one when Part II appears.

Not the further adventures of Henghis Hapthorne nor those of Guth Bandar, but a standalone. A very creepy psychopath is haunted by dark, shimmering shapes of people following his increasingly unpleasant activities. A symptom of his madness? No – it turns out that he is indeed being watched by travellers from the future, recording his descent into serial murder. He finds this out when one hapless watcher has his hi-tech masking kit fail, leaving him at the hands of the psychopath. And the last place you want to drop out of the future into the waiting arms of a putative psycho is in a butcher’s shop…..

Non-genre story in which a young woman’s friendship with another is described in the context of the oriental concept of the influence of the animal in the year in which you are born.

Tony Sarowitz. A Daze in the Life.

Near-future US in which some citizens have opted for a cranial hi-tech implant which pays them for allowing the government to use their unused grey matter for data processing. But just how benign is the processing which goes on? Paul is one such ‘data monk’ and in meeting a small group of ‘subversives’ he wonders just to what extent he is being an agent of an oppresive government who are monitoring the population and the terrorist threat. An interesting take on just how close we are to a very subtle version of Big Brother – not quite the overt one as envisaged by Orwell, but a much sneakier, subtler version.

A fantasy fable in which a young woman seeks the overthrow the giants in distant lands, but in seeking them, becomes one herself, but is able to return home nonetheless.

Bruce McAllister. The Boy in Zaquitos.

Similar to the Sarowitz story in that it postulates a scenario in which intelligence forces are quite happy to de-stabilise other countries through spreading plagues via US citizens who are carriers although themselves immune. We listen tot he story of one man as he describes his recruitment, and the moral dilemma he faces.

An issue with something for most readers to enjoy.