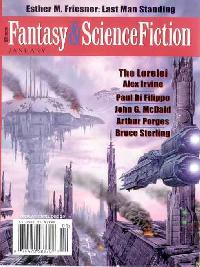 A nice piece of writing about the fin-de-siecle New York art scene, in which an aspiring young artist travels to the city, and falls under the muse of an older artist, himself under the spell of another muse. Not much F&SF in it, though..

John G. McDaid. Keyboard Practice : consisting of an Aria with diverse Variations for the Harpsichord with two manuals.

Those SF readers with an advanced knowledge of classical music get the most from this (overlong) story. Those without advanced knowledge will still enjoy a story which features a near future reality show scenario in which classical musicians are pitted against each other, under the eyes of a harsh taskmistress, and a departed genius, whose spirit hangs heavy over the proceedings. (My own musical knowledge extends little beyond songs which start with someone shouting 1-2-3-4 and finish less than three minutes later, this doubtless a reaction to having a music teacher who used corporal punishment when his students couldn’t transpose a music score successfully from one key to another).

A single pager about a young boy who is a little devil.

Good to see some short fiction from Sterling, albeit not SF. Here he gives Gene Wolfe a run for his money, in a very strange fantasy set in the The Holy Land and drawing on some mediaeval mythology.

The Blemmye is a ‘man’ from the land of Prester John, who is notable for having no head – his face is on his chest. But the Blemmye loves one far stranger than he. The Abbess Hildegard and her lover Sinan aid this ruler of their land, and are on hand when he falls, saving his beloved (crablike) from the clutches of impish devils.

The structure of the story is somewhat disjointed, making for an unsettling narrative, if an intriguing one.

In which, at the funeral of Lord Gilgamesh, we follow the (mis)adventures of a wisecracking young man scheduled to have a sacrificial role in the funeral proceedings. I have to admit only getting a couple of pages in, as the very 21stC wisecracking in a historical setting left me unmoved.

The Sterling story is an interesting one, which intrigues whilst it is being read. The McDaid story attempts (not always successfully) something quite different, whlist the rest don’t go anywhere not already well trodden.