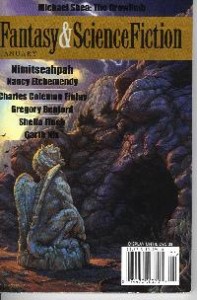 A tale of strange doings in the desert a century ago (cue tumbleweed rolling across empty prairie).

The old Pahpocket Mine has claimed many a life in years gone by, but the entrance to the mine is now guarded by rock with magical charms, and this sentinel has prevented the mine claiming more lives of late. However, feuding young schoolbodys meddle with the rock, and the gaping maw of the mine entrance feasts once more…

Father ‘Joe’ O’Connor is surprised when a name from the past resurfaces, and invites him to his humble abode. The Saudi, Ahmad, wishes to share with his old college roommate the nefarious, genmod horrors he plans to launch against the decadent west. The Muslim doesn’t quite go the fully bwahahahaha evil-baddie, but relates sufficient of his plans to leave Joe with a moral dilemma.

The story rather falls down as the moral dilemma, to my mind, isn’t much of a dilemma – is Joe going to let nuclear hell be launched to save his own sorry skin? And the evil Muslims use of cloned blonde daughters to deliver nuclear packages is just a tad OTT – he comes across as the kind of evil dude who would shop at villainsupply.com

A very short piece in which we see a transcript of an online jurisprudence process. My only beef – why, in 2015, is the computer using a command line interface?

Carl Larken is a ‘nam veteran, not quite fitting in to the social welfare organisation at which he is currently employed. He is a solitary character, who cycles and runs huge distances each day – as if he is running away from something. But if that something is within, he cannot escape it. And, sure enough, the darkness contained within escapes, due to Carl’s offering a route to the real world via a flattened roadkill.

As with the best horror, the madness gradually mounts, until the full on Stephen King horrors of his abandoned house, his compost heap (oh my god, the compost heap), and…

Out in the asteroid belt small communities eke out an increasingly difficult existence, grateful for small mercies. Broadnax takes a mining trip into the asteroids with a young female companion, but instead of having a quick bunk-up, finds himself in a perilous situation, reliant on the young woman to rescue him.

The detail of the gritty day to day lives, and that which human’s have to give up to retain a fingerhold on life off-Earth gives an added depth to the story.

A young acolyte of Merlin finds that she has to give up that which she mosts covets (the bearded magician) to get what she desires (true magical powers). In reaching for the stars she consigns Merlin to the dark depths, and, heartbroken, leaves the shores of Albion. And, erm, that’s about it.

A hearfelt tale of love and loss. Tom is a middle-aged gay man who has not quite come to terms with the HIV-related death of his partner Eric. As Tom realises that the halcyon days are over, and those that he has ‘loved’ and lost far outnumber those with whom he has anything in common, the spirits of young men of the past come back, beckoning him to return to their (ghostly) embrace.

Charles Coleman Finlay provides some solid SF, Shea’s horror story appeals, and Cooke’s non-genre story gets into the mind of the main character. The rest are fine as far as they go.