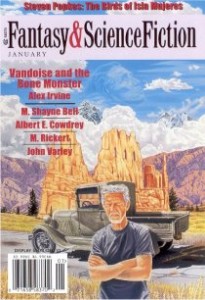 Buy a copy from Amazon.

When the protagonist finds himself in a Medicare-funded shared hospital room suffering from an AIDS-related bout of pneumonia, things seems pretty low – he is lonely and cut off from friends and family.

Things quickly go from bad to worse, as the person he is sharing the room with begins to cause concern. Mr.Schumberg has a similar infection, which should be neither infectious, nor serious. Wrong on both counts. Schumberg has unwittingly been infected by some very, very unpleasant nano-tech, which is evidenly dismantling his lung to create – something else.

Schumberg dies, and as his infection spreads, including to the protagonist, it transpires that the infection has quite chilling potential to spread. Only a nuclear or radioactive intervention can kill the nano. As the town is sealed off, and a bomb drop appears quite likely, radiotherapy is found to be one solution.

What could be a fairly routine story about a nasty tech-plague is much more, thanks partly to the quality of the characterisation, and the final scenes, in which some of the nano which escaped provides a very alien landscape compared to the human landscape which the story had features.

A tropical island setting, and Jean has fled her partner, and is looking for – something. It would appear that ‘Alfredo’ fits the bill – tall, handsome, a sexual plaything, a slave. Did I mention his robotic nature? Actually his nature is cleverly played with, as is his history and motivation.

As another woman turns up with a claim on Alfredo, Jean questions her own motives and desires.

Cambias addresses one of the time travel paradoxes – if one knows the future, can one prevent it? A young man destined to accidentally let loose an infection that will kill hundreds, knows of the exact date and time of the incident. Is he able to exert any influence over the events yet to come?

When I saw the name ‘John Varley’ on the cover I was excited. However, the two-pay ‘story’ herein will be only mildly amusing if you like are a fan of shaggy dog stories.

The author is providing a series of stories linked to myths, and in this the sad story of Philomela and Procne, and the terrible revenge they wreak on Tereus, by way of feeding him his son. All are transformed into birds, and we are left to ponder the nature of the events and the nature of ourselves. Classily written.

The Gulf of Mexico is the setting for this short story, in which a couple heading home after a vacation, turn around to help out as a terrible hurricane hits the resort they were staying at, and which has family connections for them. The storm is similar to one a couple of decades ago, and Cowdrey sucks us from a comfort paddle in the shallows into a swirling maelstrom.

An early fiction sale, and the story feels a little that way. The background: Earth is ecologically fucked-up, and an alien route off-world is available to a select few, who can design an animal whose body they can inhabit on the destination planet. We have three episodes in which Stephen puts forward a beast which will be his lifeline. Three times he is rejected, and both he and the examiner are faced with a final resolution.

A more experienced writer would probably have found a way of reducing the three episodes, and the two characters are a little flat, but otherwise an interesting story.

A historic monument out West, the site of a massacre of native Americans by those from another tribe some time ago. The site is haunted, not only by those killed, but by Vandoise, an early fossil-hunter. The story is told Russian-doll style – one within another – and Vandoise’s story, off double-tricking fossil-hunters, native American magic, and a beast created from the death of those massacred, the fossil bones, and the magic, is a macabre one.

A strong collection of well-written stories, with Bell, Cowdrey and Irvine my picks.