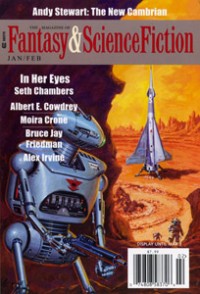 The issue gets off to a strong start, SF wise, with a taut, intelligent story sent in the depths of Europa.

A scientific team of 48 are exploring the depths of the moon, based in a large submarine base, with various smaller subs to explore further afield. And the story sets off at a cracking pace as the news that one of the crew has died. What Stewart does so well is getting into the head of the main character, Ty, a flawed, stressed character, and creating believable other characters. There are secrets, relationships, and revelations of various kinds as the story progresses, chipping away at his composure and his sanity.

A writer finds himself in a place where his story-telling skills are unique, but finds the pressure of performing particularly problematic. Can drawing on the wealth of knowledge he has of the Great Writers help him?

A well-crafted story from Finlay, whose title and opening intrigues the reader. Jeremiah Pritchard is the person unlucky enough to be hanged three times, and we follow the final days of his life, unjustly hanged for the murder of the Chinese woman he lived in sin with.

Set in California, in the small town of Raw Gulch back in the day, the narrator is keen to see Pritchard hang. When we find out exactly why this is so, the story ramps up a notch or two, and continues so to do, with touches of a black irony, as Jeremiah finds the hangman’s noose tightening around his neck too many times for comfort.

There are some dark secrets to be revealed before the shining light can appear. Hallelujah and puh-raise the lord for victry!

Seth Chambers. In Her Eyes.

The editorial introduction does mention that the story has ‘mature content’, which is putting it mildly!

It’s an intense story, getting very deep into two psyches. The protagonist is a fairly nondescript museum worker, who meets a young woman and strikes up a conversation with her. She isn’t conventionally pretty – heck, she isn’t even unconventionally pretty, but there’s something in her eyes, and something in her outwardly abrasive personality that he is attracted to. And having become attracted to what’s on the inside, she is able (it being an SF story) to make the outside more conventionally attractive. And, not only is she pretty (in all her incarnations) she is dirty.

There’s some quite lewd language from her mouth (she is keen to proffer him a XXXX that is of top quality, and to have XXXX XXXX the better to XXXX his XXXX), and I’m sure the more easily offended reader will be offended!

Allied to the physical side of the relationship, their interaction, and his reaction to her, and the glimpses we see of her mind, are extremely well-handled, and drive the story forward.

The ending is a clever one, as he finally finds out more about her, and what has been taken from granted by him (and at least by this male reader) is subverted, and leaves him with food for thought, and the reader ditto with regard to the willing acceptance of her role, and the desire for a ‘happy ending’ when the stakes are raised (that being a happy ending for him). I’d be intrigued to read a female take on the story. But it’s a story that you need to decompress from after reading it.

Will marriage tame the retired lion, or is there too much of the wild in him to be tamed? Will her mother’s warnings come true, can she tame her lion, or will the bride find some other way to keep them together?

Alex Irvine. For All of Us Down Here.

Nice take on the Singularity, from the perspective of teen whose parents ‘Singled’ when he was a toddler. He’s living with his gramps, in the increasingly ramshackle world that the Singularity has left behind.

There’s a lot that the young lad isn’t being told, and hints are dropped throughout, but there’s no reveal at the end. Good sense of place and of the teen protagonist.

Claudio Chillemi and Paul Di Filippo. The Via Panisperna Boys in ‘Operation Harmony’.

An alternate history that doesn’t quite do it for me.

Turns out he was a theoretical physicist who went missing in 1938 (presumed dead by suicide), who was in the top echelon of brainiacs, and worked with the likes of Enrico Fermi (now he is someone I do know of!). And the titular Via Panisperna Boys refers to Majorana, Fermi and others who played jazz and ‘did science’ together on a street of that name.

The story revolves around Majorana escaping Italy by subterfuge and submarine, to make his way to the US, where he rejoins his colleagues, and they immediately get to grips dreaming up some clever gizmos. The one around which the story revolves is a ‘peace ray’, which is tested on a strange creature in the American woods, and then flown over Nazi Germany to nicen the nasties.

Having brought a peace, there’s a bit of double dealing on the Allies side of the equation, but Majorana does escape through another disappearance, in an ending that rather disappoints. So really not as much in it as I would have come to expect from Paul Di Filippo (not knowing Claudio Chillemi). Having said that, if you’re seriously into theoretical physics, and have spent years pondering what did happen to Majorana, the story might be the best thing you’ve ever read!

Robert Reed. We Don’t Mean To Be…

It’s quite some time since I last read a Reed, who was appearing in F&SF on a regular basis until a year or so ago.

It’s a short story, but that doesn’t stop Reed from writing on a large canvas – a chase of a couple of billion years on a galactic canvas. And as it is often the case with Reed, he leaves the reader to make his mind up just exackerly what is happening.

The bigger picture in the story is the hunting down of the evil that lurks, and whether than can every be a truly successful task, if it can ever be a task that is truly possible.

Albert E. Cowdrey. Out of the Deep.

Another tale of ne’er-do-wells in the deep south, and some powerful magic. Fortunately Cowdrey is a master of place and person and his stories are as smooth as a barrel-aged sippin’ whiskey, and you just get transported to the coast, smoking a Cuban cigar, as a story is related that starts in the 1950s when two young boys meet on holiday, to be reunited 20 years later, post-Vietnam, and post a lot of stuff, to stand back to back (albeit employer and employee) to face a mono-browed evildoer, but with the advantage of a powerful, fragrantly female, force on their side.

The only issue with Cowdrey’s tales are they’ve made my wary of visiting the deep south of the States, and having now watched True Detective, let me tell you I’m staying this side of the Atlantic, which is probably far enough away to be safe….

Oliver Buckram. The Museum of Error.

Buckram closes off the issue with some gentle humour in which Herbert Linden, Assistant Curator for Military History at The Museum of Error, must solve a conundrum and deal with the threat from a rival museum, whilst winning the hand of the girl, and outmanouvering Mad Morhof.

It’s all done rather nicely, with some neat touches, and avoids trying too hard to be too clever and funny.