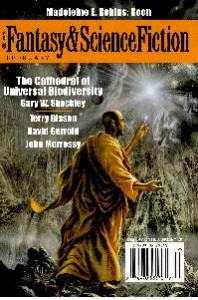 One of those stories where either I’m missing something, or the story is. The plot : four centuries hence a man who has given up the pleasures of the flesh (and being multi-testiculated that is a big loss) to ponder the Fermi Paradox. Or rather, to create three-dimensional examples of what ‘should’ be out there. The titular Catherdral is an interesting building, although the names of parts of it (Forest of Nonchalance, Grotto of Eternal Quietude) didn’t quite work for me.

This interesting idea has somewhat jarringly overlaid on it an evil Countess who is straight out of soap opera casting – she moves in having bought up initially half of the Cathedral, and shortly thereafter, all of it. With a couple of stud muffins on hand to pleasure her, she seeks a coupling with Theo, but settles for having him sculpt her. The final scene has her bemoaning humanity’s solitude, whilst Theo sips his wine thoughtfully.

John Morressy. The Long and the Short and the Tall.

Another tale of Kedrigern, who is evidently F&SF’s ‘favourite wizard’.

A lengthy novelette, serialised in two parts. Now, I do normally find Bisson more than satisfies, but this one didn’t quite do it for me.

An homage to pulp ‘planetary romance’ SF, in which a space mission to Venus has the two-man crew finding a most peculiar Venus under the cloud cover : Earthlike, with a breathable atmosphere, and Amazonian beauties riding centaurs.

The captain refuses to believe this can be happening, as logic and science argue against it. His right hand man is quite happy to grasp the opportunities presented to them with both hands, and indeed his right hand finds itself under the garments of the hospitable amazons. There is no on-page sex, true to the pulp standards Bisson imposes, although bizarrely there are several references to the amazonian’s skirts riding up and displaying their ‘orange underpants’.

The multiple references have the feel very much of the Patrick ‘Captain Picard’ Stewart’s obsession in Ricky Gervais tv series ‘Extras’ (if you haven’t seen that : Stewart, who is playing himself, is keen to talk about a script he is working on, in which he has special powers, which cause the clothes of beautiful women to fall off : “and you see … everything!”).

I can only surmise that Bisson had something of a crush on Lt Uhura from the original Star Trek, what with her micro-mini-skirt. Mind you I have two problems with the Amazonian undergarments :

Once a robot more irritating than Number 5 turned up I got to the point (it is a long story) of ‘yeah, whatever’ and skimmed through to the ending. I know that others have enjoyed it, but as with the Shockley story, just off target for me, as it veered towards Flesh Gordon pastiche rather than homage. Or maybe my suspension of disbelief is becoming less elastic as the Big 50 draws ever nearer?

Probably as far from pulp homage as you can get. Last Exit to Brooklyn via Lucius Shepard. Actually Gerrold goes to the beach, finds Lucius Shepard and kicks sand in his face for being a pussy. Take a deep breath, sit down, and dive in, as there isn’t a break for punctuation until you get to the end, and the multi-dimensional approach makes simple ‘Nam flashbacks look like A.A. Milne.

Tourists in France discussing the Holy Grail have a meal at a restaurant where the food is beyond delicious. Is is down to the chef, or that curious cooking pot he is using.

Elves and goblins move into NY, and a young mother finds herself drawn close to them.

For me Gerrold is the pick of the bunch, bravely exploring new ground, whereas the others largely tread ground beaten down to a very flat surface by many before them. The two final stories are very much of the same ilk, and ideally I’d see just one story of this type per issue.