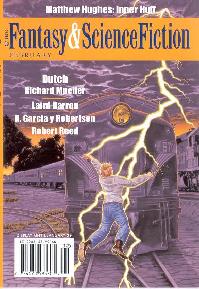 Further comic adventures of Guth Bandar (last seen in ‘A Little Learning’ F&SF June 2004), who has a pig of a day in the noosphere.

Robert Reed. From Above.

A hackberry tree in the woods is a very gentle rural setting for a story in which a higher intelligence responds to an attack by a group of children on the tree by spelling out some very unpleasant truths.

When the forces of law and order arrive, it continues in that vein, and sets in place a train of events which will have serious consequences for the human race.

Further adventures in Markovy (‘Killer of Children’ Dec 2003; ‘Death in Love’ Jan 2002; ‘Firebird’ May 2001), although this tale is somewhat less fantastical than others in the series.

A v-e-r-y unsettling story, in which you get right into the head of Ray, an out of work actor who is heading back with two scary dudes from a successful bounty-hunting task in Canada. Except that things didn’t quite go according to plan, the couple they handed over to the cops have been let out, and Ray begins to realise that things are not as they seem.

Not a whole lot happens, but you can feel the heat, the stuffy atmosphere in the car, and feel the pieces of a very strange jigsaw begin to settle in place – is Ray in the process of stumbling across a very strange threat, or is he just succumbing mentally to the drinks, drugs and danger?

One of the types of stories which F&SF does so well, in which he learn about Dutch, a Flying Dutchman of the rails, hopping freight trains, a weight on his shoulders which he has been carrying for many years, a weight which he is able, with the help of the protagonist, to eventually come to terms with.

A solid collection, with Barron providing just that little bit of something extra special in a story which will stick in the memory, whilst the others will probably not do so to the same extent.