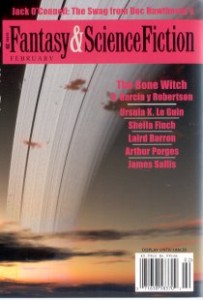 Deep in the American countryside an ageing intelligence officer, Garland, is leading a small team which is looking after some scientific experimentation in a ramshackle cabin.

Things begin to go wrong. The other side appear to have found them, and the question is whether they should abort the mission.

Things get even worse when the elderly woman who is being tested in the shack turns out to be more powerful than they thought. We are suddenly pitched into a slobbering, Cthulhic horror story. One of the highlights of good horror stories IMHO is the way that certain images, or sounds, stick in the mind.

The final scene in which the old witch rides (literally) Garland up the hill to meet …. her mother …. is one such case.

Ursula K. Le Guin. The Seasons of the Ansarac.

Previously F&SF published ‘The Social Dreaming of the Frin’, which was a ‘sociological extrapolation’, although more in essay form than story form. This is another extract from her forthcoming collection, and has a bit more of a story to it, although it remains a sketch in essence.

A short in which the recycling of chickenshit is put forward as an alternative to paper – would people read a magazine whose pages were thus constituted?

Following a fatal accident, a young dancer wakes up to find himself inhabiting the pristine body of a younger man. Saved by his lover’s wealth, he is able to use his new body to become a truly world-class dancer. Riches, fame, a beautiful lover. What more can a man want?

As is the norm with F&SF, a well-written story. However, the tale of two thieves whose house-breaking careers bring them into a very peculiar house, only becomes sfnal/speculative at the very end, and the story could easily have appeared in one of the crime/mystery mags.

A young boy finds that his uncannily religious shaped stools catapult him to world wide fame. Only too realistic, sadly.

Further fantasy adventures in Markovy. I did review the first in the sequence a while back, indicating that it appeared beyond cod-fantasy tropes. I have to admit skipping this one as it didn’t really appear to offer much out of the norm in the early pages. Funnily enough, this story has a fecal focus, just like the previous story.

A reasonable issue. The opening horror story was a pleasant change, but whilst the others were fine as far as they went, they didn’t really go anywhere that hasn’t been well trodden before.