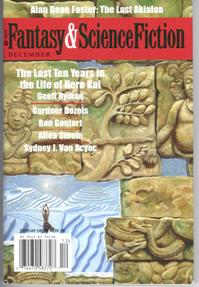 Cosy suburbia is threatened by a brand new house appearing overnight, whose occupants are evidently …. witches.

sf/f of the gentle suburban variety.

Short story in which returning to bale out her step-brother, yet again, a grieving woman finds him changed, through a visiting alien. A short meeting with the alien causes her to reflect on the barriers which she has put around herself, which have been effective in alienating her, and which she needs to remove, the better to become human and to be part of life – similar reasons for which the alien is visiting.

Allen M. Steele. An Incident at the Luncheon of the Boating Party.

Short in which (as has been done before) the background to a famous picture (a Renoir) is briefly explored, with an sfnal element.

A struggling author finds that the success he achieves comes at a price, and that price is something which he should have forseen.

I’d been looking forward to this story whilst making my way through the previous stories and have to report somewhat of a disappointment. A five pager in which we have a rat’s-eye view of the world in its last moments before a monstrous meteorite crashes into Earth, which will lead to the rat becoming king of the hill.

And that’s pretty much all there is to say about the story, which is a bit of shame. But Dozois has set a very high standard in the past which he has to live up to (and surpass, hopefully!)

Having just read Harry Turtledove’s ‘Audubon in Atlantis’ (Analog Dec 2005) which had minor sfnal elements in a yarn which followed a scientist on a rare bird hunt, having this story introduced as having no sfnal elements didn’t stand it in good stead.

So if you have an ornithological bent, or like adventure stories featuring scientistis in swampy jungles, look this story out.

If you are a regular F&SF reader you will be familiar with Goulart’s ‘humorous’ SF stories, and will doubtless either reader it or avoid it. I’m in the latter camp.

Geoff Ryman. The Last Ten Years in the Life of Hero Kai.

I generally like Ryman’s fiction, but may well have approached this story somewhat exasperated by the preceding stories not really doing anything for me. Ryman has a mainstream novel set in Cambodia due shortly, and he has drawn on this to provide some form of re-telling of a Cambodian tale/myth of a monk who led a revolt against the Vietnamese a century or two ago. We follow the monk’s travails through 10 tenets, which involve magical actions.

A bit of a disappointment for me, with none of the stories really grabbing me at all.