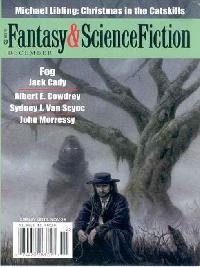 Having just read the Oct/Nov double issue of F&SF I ploughed straight in to this issue, and found halfway through I had to intersperse my reading of it with stories from the latest Asimovs, as I was suffering SF withdrawal, and had to get my fix!

Cady died last year, and was working on this story late into his terminal illness. Down in the deep south, the miasmic fog which can hug the river enables a lot of secrets to be kept, and for men to get away with a lot of wrongdoing.

A F&SF veteran (40 years and counting) brings a counterpoint to the previous story – whereas you could smell the dark, rotting vegetation and feel the clammy fog on your skin, in this story you can almost smell the bouquet of the flowers and the gardens variously described. In a far future, in which wars have passed, Didra has taken in Topra, a young girl much her junior, a girl whose blastiose was thawed many years after her conception. The younger woman is youthfully enthusiastic about observing a religious parade which is to take place, but the older woman, who has turned her back on one of the faiths, is less convinced.

Their relationship is threatened with being ill-fated, but they come through a stronger, more balanced pair.

A detective story with a difference – or several differences. The detective is an IT specialist, working with a number of other nerdy types in the basement of the police station. His services are called upon by Homicide when an AI is reported dead by its peers. There is a quandary – is it homicide or a property felony? Koestler is charged with finding out what has killed the AI, and he gets help from the AI community through a fetching Afghan Hound (her introduction to the story is a doozy – as we are led to believe she is a long-legged blonde of the female variety at first).

It transpires that some AIs have been ‘riding meet’ – linking to humans and vicariously enjoying human emotions. One human has found a way to fatally corrupt the memory cores of AIs, and he has to be found (and he is to be found in the German town of Bad Homburg, hence the title).

A clever story, with more originality than is often the case.

Albert E. Cowdrey. The Name of the Sphinx.

A class story. Cowdrey returns to a setting of some previous stories, to excellent effect (and to bigger effect if you know the older stories).

Our hero has the good luck to be living with a lady who is not a stranger to witchcraft. Not only is she able to use her skills to good effect in keeping him (ahem) sprightly for his age, she is also able to kick his prostate cancer in touch.

However, such things must be paid for, as the Powers That Be are not at all happy of time being cheated in this way, and they come visiting.

The story is set up for a typical ending of stories of this sort (excuse the huge generalisation) but Cowdrey pulls a fast one on the reader, in which we realise that there is only one neat thing to do.

Short Brothers Grimm-ish tale in which a young man seeking his fortune finds that not only can his watch talk, it is more than passing clever, and in helping it achieve its mission, he is richly rewarded.

Michael Libling. Christmas in the Catskills.

A couple out on Christmas Eve find themelves snowed-in on a back road. Worse still, they are under a greater threat. Their rescue by some local people would appear to have saved them, but their olde fashioned beliefs about Christmas Eve, and the creatures patrolling outside, make their prospects altogher more chilly.

As with the Cowdrey story above, the final page has a delightful twist (and twist again) in the tale.

An excellent issue, albeit with little or no sfnal content.