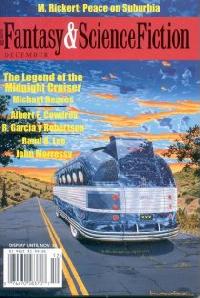 Michael Reaves. The Legend of the Midnight Cruiser.

An updating of the Ancient Mariner tale, in which a mid-life crisis leads to a never-ending journey of the dark country roads in a motor-home

Nicely observed, through the viewpoint of an old friend whose approaches the big 5 0 without a whole lot to look back on, and yet it is his friend who has seemingly everything, but who ends up navigating the night in search of answers.

Another short tale from Rickert, who has previously featured in F&SF with re-tellings of old fairytales. Here it is a Christmas-time which has mysterious portends.

I had a couple of reads of this crime story, as my mindset was obviously not tuned into the crime genre. A bitter divorced man is presented with an opportunity to gain revenge on the man who took his wife from him. And on his wife. But all is not as it seems.

Another of the Markovy fantasy tales. Here Christianity and more pagan beliefs on the Russian steppes are the background to a tale that features rocs, demi-gods Eros and Persephone, feuding baronial fiefdoms, teenage Sapphic naughtiness, ritual stonings, harems, Sapphic sex between a nun and an ex-nun, flying vessels, a siege, alcohol, unrequited sapphic yearnings, arrows tipped with leprosy. Phew!

Did I mention the Sapphic sex?

Part of a story series featuring interaction between humans and the alien D’/fy.

The story is taken forward through two perspectives. One is the diary of an ageing, terminally ill human who was amongst the First Contact crew, and who has given up of her DNA to enable a human/alien hybrid. The other perspective is that of the hybrid him/herself, whose story starts in utero.

An impressive story, filled with some quite alien aliens (as opposed to the plethora of stories where the aliens are introduced as having fur, but are otherwise entirely human in the communication, lifestyle etc). My only criticism is with Lee’s use of a cumbersome naming convention to strengthen the alienness, but which tends to get in the way IMHO. To my mind, D’/fy might look OK on the page, but the aliens would be known as The Diffy, wouldn’t they? And the four-element names for the aliens didn’t work for me in the same way that UKLG’s ‘My name is Ding bal-a ‘k-Rem Parshaal-t-chutnee al em Bimbalaboo, but I am known as Bim’ tends to grate.

A short note clarifying why hunting a Unicorn can be particularly problematic. Hmm.

Another baby boomer finds that getting drunk, overdoing the garlic with dinner, listening to Simon & Garfunkel, and reading an HP Lovecraft story before bed-time is a recipe for nightmares. The formulae for this, I have worked out is :

For me the issue gets progressively stronger, with the earlier stories not quite doing it for me to any great extent.