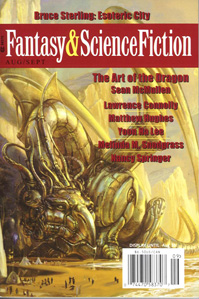 Sean McMullen. The Art of the Dragon.

Dryly satirical tale in which a gigantic dragon appears and destroys the Eiffel Tower, then begins a world tour, destroying other notable buildings, statues and art collections. An observer of the initial attack enjoys celebrity status, and indeed has a greater role to play, his personal peculiarities putting him forward at one point for the role of a sacrificial virgin at the hands of those who have taken the dragon as a deity. Saved by the dragon, he (and the reader) are left to ponder the nature of the visitation. The message appears to be that humanity has in fact called it into being, and that our love of art has been holding us back.

Nancy Spring. You Are Such a One.

A middle-aged woman sadly accustomed to being taken for granted, finds that she has also been playing the role of a ghost in an empty house. Drawn to that house, she finds herself at home there.

Melinda M. Snodgrass. A Token of a Better Age.

Set in the milieu of the author’s ‘Edge’ novels we are informed in the editorial introduction, although I must confess to having heard of neither the ‘Edge’ novels nor Melinda M. Snodgrass.

It’s a mixture of historical and fantasy, not my cup of tea, but there’s religion and science and a historical setting for those of you for whom it is your cuppa. The final sentence is a frustrating one, as the narrator, upon taking his leave, informs his erswhile companion as to his identity, which suggests that this is a revelation for the reader, but it left me none the wiser!

A young guy in a basement gets his nickname from the hunchest he goes with when playing poker with his neighbours. When he dreams up an idea for a time travel machine, he finds the odds are against said neighbours.

Fantasy set on the slopes of a volcano, a young man finds a companion with whom he can face the challenge of the local sorcerer. However, she is more than she seems, and it is a question of whether he is in fact supping with the devil himself.

French fabulism – a young man begins to grow wings, which he and his girlfriend have to come to terms with. They have different ideas, and when push comes to shove, their relationship is defined by his ability, or lack thereof, in the flying stakes.

Lawrence C. Connolly. The Others.

A sequel to ‘Daughters of Prime’ from two years ago, which left me far from impressed with the xenolingual adventure which concluded ‘I am X-aha the X-ooh?’

The story picks up without any preamble (F&SF put up the previous story on their website in cases such as this, which is welcome, although when you’re on a train with a copy of a magazine in your hand, getting online isn’t an option!)

The protagonist is one of a group of clones, and we find out immediately that there is a potential issue with one of the clones, who is evidently taking on more of a leadership role than should be the case. There is also a drama as a nesting site for some local nasties have been found, and there’s a sudden rush to intervene to protect the race they are observing.

On the sub-continent, a mother finds that she has to resolve a problem caused by her daughter’s misbehaviour at school. Is she willing to counternance the use of technology to monitor and guide her daughter, or will this be too intrusive?

After a story featuring the healing properties of Aloe, one that features its usefulness for non-medical situations.

A young man finds his ESP, previously confined to putting the odds in his favour in the local casino, is of use to the local, and then the national, law enforcement agencies in dealing with a local kidnapping. He gets closely involved in the case, and with the kidnapping victim. He decided though that a girl in the hand is better than a girl in the bush.

Sterling raises the tone with an erudite tale set in Turin, where a man who has made a Faustian pact through which he has achieve riches in the motor industry, faces the final reckoning. However, it’s not as black and white as he expected, and after descending to hell, he finds himself confronting a Satanic presence of an entirely different colour than he has been expecting. The story ponders whether those in the automotive industry are truly as guilty as they are generally portrayed.

The two classic reprints are good ones – Tina Kuzminski’s ‘The Goddamn Tooth Fairy’ and Jesse Thompson’s ‘Snowfall’ both have dark themes at their heart, the former seeing a widowed man and a sexual abuse survivor being given a second chance, and the latter a victim of incest finding release from her torment through a magical relationship with local wildlife. They are both contemporary stories, beautifully written, and set a standard for the new stories to meet.