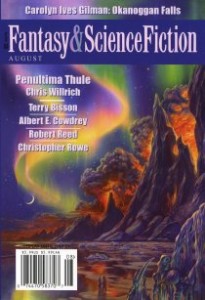 Gaunt and Bone return for more cod-fantasy fun, the story being partly in tribute to the recently departed John Morressy, a fellow supplier of comic fantasy. If your fancy runs to stories of wizards and magicke, and you can’t wait for the next Harry Potter novel, then this will doubtless keep you going.

Christopher Rowe. Another Word for Map is Faith.

Rowe’s ‘The voluntary State’ on SCI FICTION was a memorable short story, and he hits the mark again, the only problem being the rising disappointment as the story progresses as you realise that the story is coming to an end. Editor GvG should really have returned this with a Twistian ‘more please…’

The setting is a near-future US, strangely affected by both geographic and religious upheaval. An academic group are visting part of the countryside where the geography no longer matches the maps. A splintered christianity is a further backdrop, and the fervour with which the group attend to the righting of the wrongs that their eyes see is a chilling foreboding.

For me, similar to last year’s ‘The Calorie Man’ by Bacigalupi, Rowe has put together a believable, three dimensional, near future projection that is quite unique. OK it is short, but better that than ekeing out something thinly over a lot more pages (did someone say ‘Frank Herbert’?). A lot of SF simply relies on standard settings and tropes, and doesn’t really provide anything truly original, and stories which do have that bit of inventiveness do stand out. (Paging Messrs Dozois, Hartwell, Strahan, Horton).

A shorter story, being a first published one. A tyro writer sees the chance of shaking hands with a prolific author as being an opportunity to draw inspiration.

Another look into the dark corners of New Orleans. A slightly suspicious death of an old lady who had befriended him in his childhood leads a lawyer to doggedly pursue the millionaire doctor who had over-prescribed. But it turns out the old lady is after revenge – a much nastier revenge…

Robert Loy. Jack. B. Goode and the Neo-Modern Prometheus.

Ouch. A humorous look at someone who is called on by Dr Frankenstein, who admires his brains. Loy provides jokes that Mel Brooks would have refused to have in ‘Young Frankenstein’ on account of being too broad. The closing pun is somewhat spoilt by the author having used it, with only a minor variation, earlier in the story!

In the land of the blind, the one-eyed man is king (or something like that). Anyhoo, when a viral outbreaks causes humanity to make bad judgment calls, and dufiosity to reign, someone whose life has consisted of nothing but that has a head start.

It feels like a germ of a story, but lacking that something special. Although Reed is prolific, it is rare to read a story that feels like something that has perhaps been written in one long sitting and put to one side as finished.

Terry Bisson. Billy and the Spacemen.

One of an ongoing series of shorts in which young Billy meets up with some fantastical creature(s), who invariably create a bit of a disturbance, but fall foul of the young chap. This month : small spacemen.

Humanity has been invaded by powerful aliens – a mostly peaceful affair, and in Okanoggan Falls the aliens are largely things to be seen on television, as rural life goes on. However, it transpires that Okanoggan Falls is sited on some real estate the aliens have taken a fancy to, and forceable relocation is going to happen.

Resistance is futile, according to the aliens (not in those cliched words), and there is debate in the town council as to just how to react. Some politics are played out, and a local housewife tries a very subtle form of resistance.

She welcomes the alien in charge of arranging the relocation of the townspeople, and the pair get to understand each other very well. As the rock-like alien gradually becomes more human (quite literally!) the bond threatens to become a stronger one.

However, the potential love affair is of course doomed, as is Okanoggan Falls. But whilst the townspeople may lose their homes, humanity has perhaps made a small step, and whilst it may not be the end, or even the beginning of the end, it may be the end of the beginning. (Thinks : I’m sure I’ve heard that before…)

Christopher Rowe and Carolyn Ives Gilman bring that bit of something special.