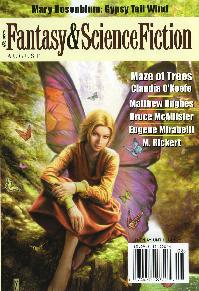 A prequel to the adventures of Hengis Hapthorn to which readers have been regaled/subjected (delete as appropriate).

O’Keefe follows her ‘Black Deer’ (F&SF April 2005) with another story in which the wilds of America create a very strong backdrop.

West Virginia is a lonely place – mountains, slopes and forests – and it is more than able to protect itself. Carly is lured to the state, leaving behind less than happy times in the city, but finds that her welcome is a firmer, darker embrace than she had hoped. The farmer whose job offer has brought her to a very remote house, is hanging from his neck from the rafters. He has left his farm to her, but also passes on a gift .. a dark power, through which she is enabled/required to take on a role of Goddess of Lonely Spaces.

Having carried out that role for a while, she makes the mistake of falling in love with a visitor to the state, and that love affair can only be a transient one. Chilling and macabre.

Some quality Science Fiction (of which there is far too little in F&SF for my liking – that is to say, not enough SF, as opposed to it being of poor quality). Set in the milieu of the author’s forthcoming novel ‘Eternity Shift’, Zaharah is working on a spaceship out in the Oort Cloud, working for Panne/Lorenzo a two-person dyad. Having docked with a gypsy encampment she meets some of the dna-mod ‘humans’ who are ekeing out an existence far from Earth, but ends up relying on them to help her overcome the bonded nature of her employment, her double-dealing dyad boss, and the attentions of pirates who are after her ship.

Short, tongue in cheek alternate takes on some F and SF cliches.

Another strong story from an F&SF regular. A touch of the Stephen King’s (the story is dedicated to him), in the telling of a woman who has lost her child, and who is worried about the crows in her garden. At first we think that this is due to her bereavement, but we find that the crows and what they represent have further plans, and things get progressively creepier as the dark forces take her brother and husband, and then start on the neighbourhood.

Another dark tale of horror – could perhaps have been separated in the issue, rather than following straight on from the previous story.

The Old Optical Shoppe over the road is closed, the optometrist who dispensed some very special glasses having not been seen for some time. It transpires that he has not heeded his own advice, and used his glasses to look into his own soul, rather than others. Will the tempation to follow suit be too much for the protagonist? No – as he is an ‘amoral old fart’ and is more than happy to keep to the rules for his own end.

The author’s ‘Only Known Jump Across Time’ (F&SF Sept 2003) was an elegant little story, and this also. The mad burst of passion which inspired Schrodinger some generations ago similarly ignites the creative process in a physics doctoral students, and the story traces his growing relationship with a girl who might, or might not (that much is uncertain) be a descendant of the alpine coupling. The story is probably an Analog-reader’s wet dream (stereotyping the readers of that magazine as male scientists with limited experience of the fairer sex).

With a ‘proper’ SF story, humour, fantasy, horror, and ‘science’ fiction there’s probably something here fore everyone – except those wanting quests and mighty-thewed warriors. An excellent issue.