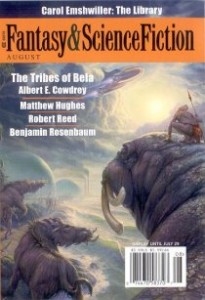 Reed returns to the strange milieu of ‘Raven'(F&SF Dec 2001) and ‘Buffalo Wolf'(F&SF March 2003), in which we are treated to Gene Wolfe-esque glimpses of strange events in a setting just slightly off-key from that which we know. Here young Raven is making his way in the forest when a strange flying contraption crashes lands nearby, and he watches as a young girl and her fatally injured brother struggle to free themselves. Raven has a choice (or choices) to make, and in the end that choice is between those of his kind, and those of the other kind.

Cowdrey’s regular F&SF contributions tend to have a New Orleans setting, but here he goes for an all-action story on a planet called Bela. In a dramatic mix of themes and setpieces from films like The Thing, Alien, and Outland, a cop comes to investigate a spate of murders. There is some resistance to his presence from some quarters, but he is welcomed with open arms by others. He has to work out who is committing the murders – or if not who, what?

All hell breaks looks in the latter half of the story, with a previously unsuspected alien presence wreaking having on the small scientific colony, not helped by the fact that the aliens have a human on their side. A desperate rearguard action takes place, as the dwindling number of survivors fight to stay alive until a scheduled cargo vessel arrives. There is a (too!) neat ending when having just picked up one survivor the cop sees throught the shuttle window the scientist who sided with the aliens getting her just desserts.

An interesting departure for Cowdrey. The technique of using diary transcripts doesn’t quite work, IMHO, as the transcripts are not what you would get in any kind of diary log, but are narrative descriptions. The finding from the court of inquiry, the transcripts of which are evidenced to, provides a sadly believable ending.

Relatively new author Rosenbaum continues to impress with his fiction, and here he provides a v-e-r-y strong, assured piece. A relatively near future US sees children’s development being halted, enabling them to stay at a specific age for any length of time. The society is stratified by age groups, and we follow a group of nine year olds as they go house hunting – falling in love with a house in the shape of a pirate ship. However, one of the gang has decided that enough is enough, and wants to restart her biological clock, leading to tensions in the group.

A powerful story of of love and hate, truth and deceit, war and peace – as the leader of a raiding party and a librarian from the library he has been sent to destroy are thrown together, each having to confront their own prejudices and beliefs.

Matthew Hughes. Relics of the Thim.

Hughes’ humorous Hengis Hapthorn returns (‘Mastermindless’ F&SF March 2004), the far future detective off-Earth on account of an invitation, coupled to a First Class ticket, to travel to the planet Pierce. Is the fraudster purporting to have discovered time travel up to his usual tricks, or do the ancient (and long-lost) Thim have a hand in events?