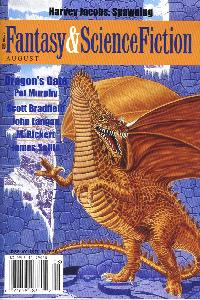 Hmm, I was hoping a bit more from the story, considering it was Pat Murphy writing it, but was rather let-down. Of course I generally shy away from fantasy of the type in this story (enchanted beauties, dragons etc). Anyhow, this is a story about enchanted beauties / dragons, wandering minstrels/storytellers, and mythology.

The plight of lovelorn humans can be a sad one, what with dating agencies, internet chat rooms etc. But it’s even worse for our canine friends. However, the course of true love (and bottom sniffing) runs true.

A tyro writer is quite uninterested in the critique of his creative writing abilities. He demands a second opinion, and finds he is in a minority of one with regard to the assessment of said abilities (or lack of them).

Somewhat verbose in his writing, as comes across in the story, the young mind finds himself digging a deeper and deeper hole for himself.

A neat idea, although not hugely original, and whilst being well written, the story does extend beyond its natural length.

New writer Rosenbaum has hit the ground running with regards to his writing career. This story is perhaps a pause for breath. Short and surreal, one wonders if Rosenbaum had eaten a bit of dodgy strudel before writing this piece.

A somewhat unworldly couple allow their young daughter’s Internet use to lead her to her death at the hands of a paedophile – one who is bold enough to come to their house to pick her up ostensibly to visit her Internet pen-pal.

The mother finds solace in a strange young girl in town, who appears to offer her a channel of communication with her daughter – whose ‘life’ is now unsettling and upsetting.

Marisa and Neil have taken foreign exchange students for several years. This year, however, their visitor is an alien. Particularly problematic for them is that he is a most unpleasant alien, of a race who are accustomed to treating their hosts like dirt, and the Earth couple have a might miserable time in catering to his whims.

A delightful little story of the type F&SF do so well.

Alan Bragle is out shopping when a fish in the market enthuses him to ‘spawn’. Previously not driven to this end, Alan’s life is transformed, and we follow him on his lengthy life as he accedes to the fishy urgings.

A so-so issue, some way below their best, and bit below the average high quality.