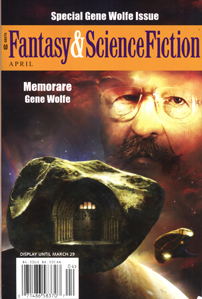 This special Gene Wolfe issue leads off with an SF story which confirms just how good Wolfe can be. On the surface it’s a story of a well-established type : a curmudgeonly longer out in the solar system is investigating some very strange artefacts which prove to be qutie dangerous, and has to use his cunning to survive.

But it’s must more complex than that, which some very well observed and well-rounded characters, and the underlying shifting sands on which the story is based – with Wolfe there’s always another dimension, or some subtle effects of which to be aware.

The setting is an intriguing one. March Wildspring is exploring, and filming for a documentary he plans to pitch to the studios, memorials placed in space. Not mere gravestones, these are complex structures, some of which threaten those who explore them, seeking to honour those whose memory they mark with further souls.

The story begins with Wildspring, aka Windy, aka Marchy, managing to extricate himself from a near-fatal memorial, and receiving a message from Kit, a front-of-camera TV personality, with whom Windy is madly in love, but feels that his lack of looks and rough and ready charms are a barrier to a partnership. She is en route to him, with a female friend, Robin Redd, who is running from her violent partner. However, when the pair turn up it transpires that Robin Redd is a name now being used by Windy’s ex-wife, Sue, with whom he had a tempestuous relationship and a vicious divorce.

To make matters worse, Robin’s current husbant, James Redd, turns up, looking for her. Amongst the complex interpersonal interplay, the drama unfolds as Robin flees to a neighbouring memorial, and the others follow in pursuit. They find themselves in a very large environment, peopled with hundreds of acolytes who are labouring under a VR misapprehension that they are living in a paradise, when the reality is altogether different.

In fleeing the habitat, Kit is killed, and Windy is left with the option of leaving Robin/Sue behind, or risking all to go back to save her. All is revealed in the closing credits.

It’s an engrossing story, with the complex swirl of current and ex-relationships, personalities, and motivations all swirling around each other. Windy loses the love of his life, but mysoginist that he appears to be, he is able to refocus his attentions on his ex-wife, choosing what to believe in and what to see being part of the underlying elements of the story.

An immediate followup to the previous issue’s story in which a letter from author Gerrold purports to relate his adventures in the wilderness, and his rescuing a very strange creature. Here he relates a return to the wilderness, which is unsuccessful in finding concrete evidence of those who may be living there. It references F&SF editor GvG at the end, and it’s perhaps stretching a conceit just a little too far to cover two stories.

More of a straightforward horror story, but with Catholicism featured as in the Wolfe story. A young girl, faced with a man whose cannibalistic tendencies are part of her past, has to face up to him and to a personal choice when he returns.

Another clever story from Levine. He starts with a grandmother and daughter facing imminent death by asphyxiation on the asteroid belt, and gramma uses stories of the legendary Titanium Mike, whose superhero powers have saved the day many a time. The stories of his derring-do sees them through a couple of dark hours before rescue. There follows a few further vignettes, going back in time, as the legend gradually becomes more human the closer to his real life. The final vignette, of Mike himself, shows a much more humble character, but who is able to make a very human, small scale gesture, in its own way as heroic as those adventures with which he will become immortalised.

Bookended by some excellent SF, with a handful of short articles about Gene Wolfe, making a cracking issue for those of you, like me, who like science fiction in general and Gene Wolfe in particular.