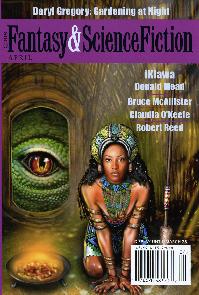 Analog-style ‘scientist fiction’, or ‘lab opera’ as editor Gordon van Gelder uses to introduce the story. As a rule thse stories leave me cold, but Gregory has a little more in it than most, with one scientist well out on the autistic spectrum (as opposed to being a heroic action hero scientist as in many of these stories). But the central conceit didn’t really grab me, and for the record, as a memory jogger, this one involves little robotic creatures which are being designed to defuse minefields, but there small AI is just enough to help them take a step up the evolutionary ladder.

A bit of spirit magic thrown into a long take on Zulu history in the days of oppression by the British Empire.

Near future MLB, with technology tilting the balance in favour of the batters, as home runs are what are called for. But one pitcher gets a tip from an AI in an elevator who wants to redress the balance, and a bit of cunning and old-fashioned mindplay help his creaking shoulder.

A short story, set in the Cold War, in which a young boy is given an opportunity to eavesdrop on some kind of conversation from orbit, or from the stars further beyond, with the sense of childlike wonder at what may out be there, and what the future may hold being the crux of the ‘story’.

Claudia O’Keefe. The Moment of Joy Before.

A fatal strain on flu sweeps across the world, and we watch its approach and impact through the eyes of Felice, whose child is whisked away to the mountains to a place of (supposed) safety, and whose mother travels in an altogehter different direction. We follow the events through the eyes of Felice, and her strange perception, for she is almost sleepwalking through those events, as a dark presence shadows her. Whereas Stephen King’s ‘The Stand’ and Captain Trips goes for the jugular and the scary bone, this is a Hitchcockian assault on the mind…