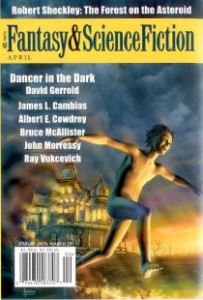 A very Analog type of story. A team of scientists is studying alien life under the seas of a distant planet. The team is led by a universally unpopular chief scientist who has arranged for a special ‘stealth suit’ to be shipped to him that will enable him to get closer to the alien life than they are allowed (they are under strict instructions not to make Contact).

Interspersed with a rather juvenile background involving his team thinking of ways to dispose of him, we have an insight into the alien life, by means of their very humanlike scientific debates.

Fortunately there is some justice, as the unpopular braggart chief scientist finds that his stealth suit does not prevent him from the aliens detecting him, and their experimenting on him to discover his exact nature.

The wizard-cum-detective Kedrigern reappears twixt the pages of F&SF once more for some further light-hearted adventures, with Death making a guest appearance from Discworld.

Robert Sheckley. The Forest on the Asteroid.

Sheckley gets all Aesopian on us, showing us that if you aren’t careful you will find what you are looking for (a vicious gorilla in this case!) In politics the ‘600lb gorilla’ is the big awkward issue which politicians choose to ignore, and the owner of the Asteroid in question would have been well advised to turn a blind eye to the unwanted guest on his terraformed haven.

‘The Poor Miller’s Apprentice’ is evidently an old fairy tale, and this is a (I believe the popular word in cinema is now) ‘re-imagining’ in which the tale is told from a different perspective. I rather feel that you could feel a shelf full of books packed with such fiction – but why would you want to?

Cowdrey gives the issue a kick up the backside with a dark, claustrophobic, unsettling story. Missy Lemieux is a southern gal, hot to trot, and barking mad. Her madness is driven by her gift/handicap through which she can hear the echoes of dark voices. Starting off with one brother in the sultry south (where most of Cowdrey’s F&SF stories are set), she ends up memorably, fatally, in Europe, in and old concentration camp, with the other brother.

One of Vukcevich’s very individual stories – think the speaking-backward nightclub scene from Twin Peaks and you have this story – a very strange story involving noxious gas.

David Gerrold. Dancer in the Dark.

The issue finishes on a high note with one of the better stories in F&SF of late. We follow a young boy, who, his mother having died, is put on a train with other children, to leave the city for the safety of the country. This is unsettling enough, but the train journey is through a strange darkness, and a society which is obviously, but not clearly, different from ours.

He finds himself on a farm, with a spinster/widow woman, and we gradually find out more about the darkness. Gerrold twists the story towards the end as we find that the darkness is not a thing which the farming community are fighting against, buth something which in fact they are creating to shield themselves from the light.

And in that light…. (well, you’re going to have to read the story).

The final three stories are strong ones, making up for the otherwise fairly flat stories