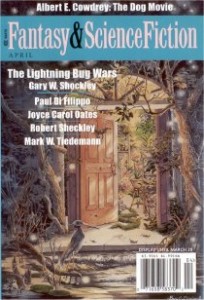 I read this some weeks ago, but managed to mislay the copy before writing the review. The magazine finally resurfaced from down the back of my comfy armchair in the living room! So this review is mostly from recollection, which may mean I miss one or two salient points.

A nearish future story in which a more unionised US is the background. Young Richard Heller’s life is turned upside down when his father has a stroke. The good news is that the technology is advanced enough to have him back up on his feet again in only a few days. The bad news is that dad now has a Direct Neural Augment, and this bit of kit makes his fellow workers extremely uneasy, as that technology can be used to do the work of one man.

Things get ugly, leading to a fatal confrontation, and Richard ends up losing his dad and his friends.

We return to the strange, strange version of Cowdrey’s New Orleans, in which an old man and his dog gain a posthumous revenge on their murderer.

An invading force find life on their newly conquered planet most satisfying. For a while. But they learn that occuping territory is not the same as winning. Hmmm. Most pertinent.

Dreamlike fantasy in which a man’s journey up and down a river sees him meet a couple of incarnations of a woman with whom he plays a strange game with involving fireflies.

Recollections of a childhood summer against a backdrop of war, in which a refugee family impact on the highly strung local community, and what has been lost becomes painfully real.

Young children find themselves in a house with a cellar with…

Their father is dead – murdered. And the murderer? And are the cries from the cellars rabbits? Or echoes of those who await us?

A young robber’s hi-tech hypno-heisting technique promises great reward. However, he has the misfortune to run into Stingo Strine. And the double misfortune that it is Strine who benefits from the hypno-induced sexual liaison with Professor Parrish Maxfield.

And worse still, with Strine and the Prof on his tail, his biggest heist is threatened.

A good collection of stories, ranging from the sfnal Tiedemann to the more lyrical Schockley, with a lot of fine stories in between.