The Magazine of Fantasy and Science Fiction, Nov/Dec 2011.

Dec 29, 2011Leave a Comment on The Magazine of Fantasy and Science Fiction, Nov/Dec 2011.F&SF, Magazines, Reviews 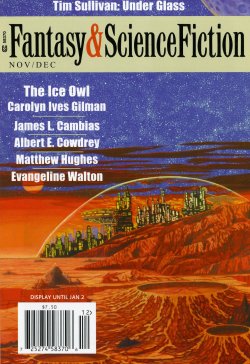 Matthew Hughes. Quarter and Triptych.
Matthew Hughes appeared some 18 times in F&SF from 2004 to 2008, with fantasy stories featuring his characters Guth Bandar, Henghis Hapthorn and Luff Imbry. In this tale the latter makes a return to the pages of F&SF.

A story in the same universe as Gilman’s ‘Arkfall’ from F&SF September 2009, which I enthused about, and which was a Nebula nominee.

Checking back on that earlier story, I noted then that ‘Gilman has put together a believable alien planet, a different human society, and believable, complex characters, and spun an adventure tale that almost matches the setting’ and that is exactly the same conclusion I had come to with this story.

Here the setting is the city of ‘Glory to God’, a quite vividly described city of metal based in an enormous crater over which a dome has been built. Living in the bottom tier of the city, and of society, is Thorn, the adolescent female protagonist. There is a depth to the society and the politics of the city in which she lives, and in the bigger universe, which we find out through her relationship with an aged teacher, her mother and her mother’s boyfriend.

Stories with an adolescent protagonist tend not to be a favourite of mind, as you get a naive perspective on issues which is great for the author, but for me to be fully rich, the story would have followed one of the adults, and to addresses the challenges they face in the light of their backstory. This is partly covered through the teacher, but only delivered through a monologue relating to his history, which prevents any emotional resonance coming through.

But these are minor issues, as the characters are complex and varied, as are the politics and the society, and I’d have put this forward for a potential Year’s Best collectee, if it wasn’t for the fact that Garden Dozois has announced his collection for next year, and this one -is- in it.

Gentle and charming short, which starts off with the death from cancer of one of the main characters, but which nevertheless manages to be uplifting, creating a couple of believable characters, as the departed one leaves his immortal soul in the capable hands of his friend.

Evangeline Walton. They That Have Wings.

Published some 15 years after her death, a suitably dark and brooding story in which three men seek refuge in a mountain-top cottage, befriended by the two women, grandmother and grand-daughter. You just know that they aren’t going to all be living happily ever after!

Michaela Roessner. The Klepsydra : A Chapter from A Faunary of Recondite Beings.

Ancient Greek linguistics and archaelogy are combined, through the work of Dr. Maeve Paideuein, who finds an intriguing references to the word Kelpsydra, and is able, many years later, to throw light on a creature otherwise lost in the mists of time….

An 800-page Alastair Reynolds novel compressed into a couple of dozen (excellent) pages. The story starts with a motley crew attempting to obtain the titular object through a raid on a remote property. Their escape route is quite dramatic, taken them to somewhere much, much further away, as the nature of Object Three and its relationship to Object One is revealed.

Teasingly, Cambias takes the reader only so far, leaving the reveal to (hopefully!) another story.

Relatively routine horror from a master of the genre, set in the woods against a backdrop of climate change and rebuffed love

Dec 29, 2011Leave a Comment on The Magazine of Fantasy and Science Fiction, Nov/Dec 2011.F&SF, Magazines, Reviews