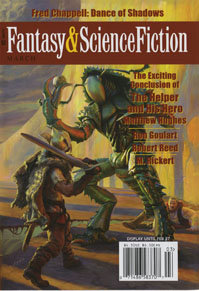 If you like your fantasy wordy and with loquacious characters using verbose and flowery language, and with a mystery to be solved, you’ll enjoy this story.

Having said that, it does feel like a little while since Reed produced a real mind-boggler of a story.

Matthew Hughes. The Helper and His Hero. Pt II.

A substantial second part to the conclusion of this cycle of Guth Bandar’s adventures.

A short story with a palpable sense of regret and longing in the few pages it takes up telling of a woman who has to leave her husband due to a change in her very self.

Ron Goulart. The Devil Bats Will Be A Little Late This Year.

A horror screenwriter finds the line between fantasy and reality blurs after a panicked call from his ex-wife : it appears a ghost has been trying to put the willies up her.

Not having bothered with the lengthy Hughes story, as is my wont, there wasn’t a huge amount to get to grips with, with Reed, Rickert and Goulart all providing stories of the ilk that they regularly provide for F&SF ie well written and OK for what they are, but none of them a humdinger.