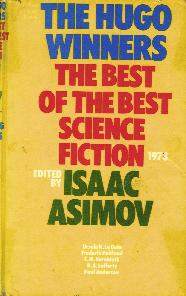 The 1973 Hugos get a whole volume to themselves. The volume contains all four winning stories, and I have cut and pasted summaries of stories which I have previously read. At some point in pico-time I shall read those I have yet so to do, and put summaries/reviews in to fill the blanks.

Poul Anderson. Goat Song. (F&SF February 1972)
Far future in which mankind is controlled/governed by SUM, an AI. SUM offers life after death, but the protagonist, grief-stricken after the death of his love, petitions the Dark Queen, the representative of SUM on Earth, to recreate her. (Follows in many respects the Greek tale of Orpheus and Eurydice.)

R.A. Lafferty. Eurema’s Dam. (‘New Dimensions 2)
Young Albert despairs of himself as being intellectually challenged. Everyone else is much brighter than he. But what the lacks in smarts he makes up in cunning, and his particularly unique ability is to create machines, far cleverer than himself, to do his bidding. But his track record in this department is not a good one, as whilst creations are invariably wonderful in their complexity and intelligence, they do not make him a happy or successful person. Until we reach the end of this blackly ironic tale, in which he finally sees the rest of the world as being there for the taking.

Frederik Pohl & C. M. Kornbluth. The Meeting. (F&SF Nov 1972)
Pohl finished this story on which he had made notes some fifteen years previously with the late Kornbluth. Harry Vladek and his wife have a son who is severely handicapped. Medical developments mean that a brain transplant is an option – will they take the healthy brain from a road traffic accident victim for their own son? But with the brain of another boy in the body of their son – will it be their son?

For those of you so inclined, there follows a list of links to other volumes which attempted to identify the best short stories of 1972 :