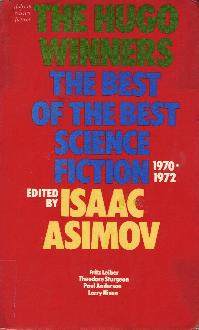 ‘Hugo Winners Volume III’ followed (not unsurprisingly) the first two volumes of collected Hugo award-winners, and appeared in a confusing variety of editions, primarily on account of its large size. The edition in (my sticky, eager) hand is the hardback UK edition published by Dennis Dobson in 1979. As your Earth days are restricted to only 24hrs, and as I have a range of other duties which prevent me reading the stories herein at the present moment in time, I shall, as ever, list the contents, drawing on older reviews/summaries of mine which I may have made in reading the stories in other locations.

The book was an eBay purchase, and originated, as evidenced by the stamps inside the book, from the rather posh Whitgift School in Surrey, so hopefully the volume will have launched a lifelong interest in SF in some of the alumni of that august establishment.

The previous volume finished with coverage of the 28th Convention held in Heidelberg in 1970, but neglected to include (or indeed mention, other than in the appendices) Fritz Leiber’s Hugo winning novella ‘Ship of Fools’ from that year (on account of editor Isaac Asimov having not attended the con). Having recognised this omission, this volume consequently starts with reference to that Convention, and includes the story at the start of this volume. Although, readers may we be confused, as the contents page just lists the Leiber story under the heading for that convention, leaving the casual reader the impression that this story was the only winner in Heidelberg (whilst the previous volume gives said reader the impression that the only winner was Samuel R. Delany’s ‘Time Considered as a Helix of Semi-Precious Stones’).

there was a young stripper named Eva
who did bump, grind and get in a fever
so hard was she workin
she shook loose her merkin
and finished her act on a split beaver

Poul Anderson. The Queen of Air and Darkness. (F&SF April 1971)
Also won Nebula Best Novella. Anderson describes vividly a very alien planet and its inhabitants, and how their lives are threatened by, and how they threaten the lives of, the explorers from Earth. Magic and science come face to face .

Larry Niven. Inconstant Moon. (‘All the Myriad Ways’)
If you haven’t read this classic short story, why not buy it for a few cents from FictionWise before your read the next sentences? The moon becomes very, very bright. Romantic perhaps? But if moonlight is simply reflected sunlight, then what has happened to the sun? And if the reflected sunlight is very bright on the side of Earth facing away from the sun, what about those on the side of the Earth facing the sun? Niven describes vividly a couple facing their last night on Earth.

For those of you so inclined, there follows a list of links to other volumes which attempted to identify the best short stories of 1971 :