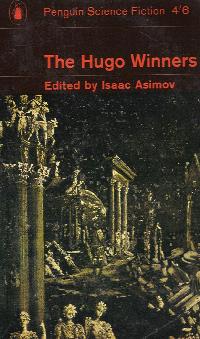 Isaac Asimov introduces this first volume of Hugo winners, beginning with the 1955, 13th Convention, in Cleveland, at which he had been Guest of Honor. This was the Convention at which awards for stories became a regular feature, although the book isn’t clear about what was considered and nominated in each year, as stories from ’54, ’55 and ’56 variously appear in the 1955 and 1956 Awards. And with the subsequent conventions each making up their own rules as to what to provide awards for, there’s no real consistency across the years.

This volume provides the winning story in each category – with differing awards being made at each convention. The information below regarding the other nominees has been taken from the excellent SF Awards Database

Scroll down for details of winners (summaries to follow)

Robots have replaced human actors on the theatrical stage, and now ex-thespian Ryan Thornier is in reduced circumstances. He is now a janitor in a theatre, somewhat half-heartedly so, looking back on his days as a successful actor. It’s a long read, one which I haven’t completed after a couple of attempts. The theatre manager is stereotyped Italian (fortunately not a Jewish stereotype!) and the sfnal elements set up a long character-led theatrical drama. For a review of the story from someone who enjoyed it read the review by Robert Wilfred Franson on the troynovant.com website.

A fairly weak shaggy dog story with the sfnal element minimal and not at all crucial to the story. Best SF review here.

Or All the Seas with Oysters. Avram Davidson.