The third and final instalment of the Adams/Howey ‘Apocalypse Triptych’ popped onto my doormat a few months back, and I’ve been ekeing out the pleasure from it since.

I enjoyed the first two volumes – The End is Nigh and The End is Now and I’ve been looking forward to the third and final instalment of the stories. (Assuming we won’t have a further volume along the lines of ‘The End Was A Little While Back and Things Are Generally Getting Better’, which would be about as welcome as Star Wars episodes I-III).

Notes about the stories and links to the original reviews on Best SF follow the triptych of book covers. 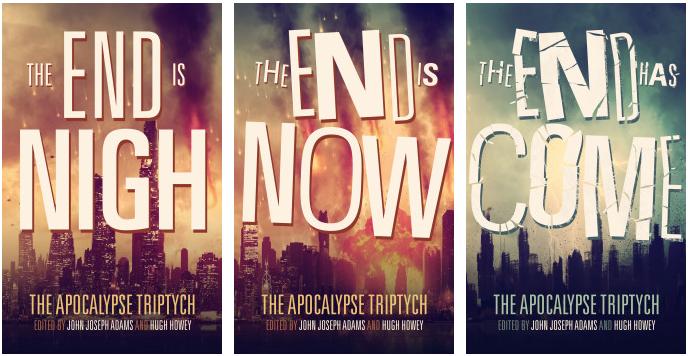 Whilst a number of the stories in this series of three books have an installment in each volume, there are some solo stories, and this is one, although it has a feel for one story in a sequence. Best SF Review

Arkenberg concludes her trio of stories with another look at the impact of an acid raid apocalypse – both on the city of San Francisco, and someone recently moved there. Best SF Review

Will McIntosh. Dancing With a Stranger in the Land of Nod.

The third of McIntosh’s ‘Land of Nod’ series, in which he created a memorable plague that leaves most of the population rigid, immobile, save for the nodding of their heads. Best SF Review

A satisfactory ending to the story. Best SF Review

The conclusion to a bleak series of episodes in a planet-killer asteroid impact story. Best SF Review

A singleton story in this third and final volume in the trilogy, and it’s a story that would have worked well as an opening installment in a three part story which would explore the nature of the apocalypse. Best SF Review

One of the most memorable of the continuing stories in this trilogy. McGuire created a complex, rounded main protagonist, and OCD lesbian biochemist, and a quite different apocalypse. Best SF Review

Excellent story from an author new to me. Best SF Review

Having set the reader up for the finale, Winters delivers in spades, when All Is Revealed and it’s a doozy. Best SF Review.

Final instalment of Wellington’s ‘high octane’ zombie apocalypse story. There’s some dramatic action (which feels a bit like a novelisation of an action movie) interspersed with some finger-pointing and blame-gaming. Best SF Review

A teaser of a story, with enough in the setting for a novel or two, or at least a series of stories. Best SF Review

Due closes her trilogy of stories about Nayima some forty years on since the last installment. Best SF Review

Robin Wasserman. In the Valley of the Shadow of the Promised Land.

Ford’s stories in the first two volumes were quirky steampunky stories, here, to slightly less effect, he focuses this story on the aftermath of Halley’s Comet in a basement, with an inventor trapped in the dark. Best SF Review

Bear had a singleton story in the second of this three volume trilogy, and has another in this volume, which also features a determined, resourceful lead character. Best SF review

Jonathan Maberry. Jingo and the Hammerman.

A slightly different tone to the horrors of the rest of the volume (mind you, there is horror in the story, but more comic book). Best SF Review

Charlie Jane Anders. The Last Movie Ever Made.

Anders’ trio of stories have stood out from the others, with her tale of a near-future apocalypse as seen through some gonzo film makers not easily confused with the other stories in the volumes! Best SF Review

Kerr’s approach to the ‘Apocalypse Triptych’ has been to write three stories linked by an asteroid impact, but each featuring different characters in different situations, and this story, a good one like the previous two, features a close analysis of the reaction of his characters to events. Best SF Review

Ken Liu. The Gods Have Not Died in Vain.

Liu brings his story of an uploaded father (or the bits of him that are left in cyberspace following his death) and his daughter, to a satisfactory, and ultimately logical end. Best SF Review

A singleton story with a fairly bog standard post-zombie apocalypse action element to it, but the setting is an interesting one and makes it stand out in a way that will prevent the reading mis-remembering it as an episode from a zombie film or TV episode. Best SF Review

Hugh Howey. In the Woods.

Sometimes I read a story and all the way through I feel I’ve missed something important, or need to be reading it from a slightly different perspective. Best SF Review

Kress brings her trio of stories, and this trilogy/triptych to a satisfactory conclusion. Best SF Review

A clever idea for a trilogy from Adams/Howey, and they had me keeping an eye open for the appearance of volumes on Amazon, and pleased to have the POD volumes on my shelves. Mind you my shelves are groaning like a zombie horde..