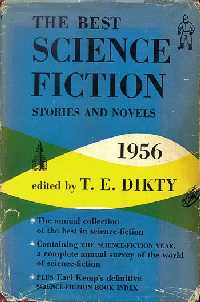 This book landed with me after an air mail flight from the USA on 22nd January 2019 and I’m now reading and reviewing the stories and inserting on this page summaries of the fuller story reviews on the site.

A strong start to Dikty’s anthology, with a story that stands the test of time well. The story flits between two protagonists, with the sfnal element being in the shapely shape of Sarith, a newly qualified psi-therapist, in her impatience to get to her first job, has transited to entirely the wrong planet. Full Best SF Review here.

A minimal SFnal element to a story that peers into the dark recesses of one human mind. Full Best SF Review here.

The story has many excellent turns of phrase, and leads the reader through the story introducing background concepts and technology, with the odd clever ‘reveal’ . Full Best SF Review here.

A story that doesn’t go much beyond the principal conceit : a man has the uncanny knack of knowing just where and when someone is going to have a brainwave or invent something – and therefore be on hand to licence and exploit it. There is a neat ending though. Full Best SF Review here.

A neat story about a boy who dreams about running away from the orphanage for a life amongst the stars, and by golly he does it! Full Best SF Review here.

I started this story with high hopes – one from no less an author than Tom ‘The Cold Equations’ Godwin, but found that this story doesn’t quite live up to his most famous work. Full Best SF Review here.

I have to own up to skipping this story as I really didn’t engage with the humour, which is laid on rather quick. Evidently Swenson, despite being partial to a drop of the strong stuff, has particular skills in managing the predicaments that the spaceships and crews of the Acme Interplanetary Express get themselves into.

Written some 18 or more years after John W. Campbell’s ‘The Thing’, but with a similar underpinning idea. Full Best SF Review here.

Robert Bloch. I Do Not Love Thee, Doctor Fell.
The Magazine of Fantasy and Science Fiction, 1955.

A visit to the shrink causes an identity crisis. Full Best SF review (or not) here.

I read this a couple of months back, and my memory being what it is, option 1 was to re-read the story and review and and option 2 was to take the easy option and refer you to another summation.

Walter M. Miller, Jr. A Canticle for Leibowitz.
The Magazine of Fantasy and Science Fiction 1955.

As with the preceding stories, I read this a couple of months ago, before sitting down here to write this. I can though remember enough of this story to feel confident in writing about it here. This is of course a classic of SF, this short story appearing a couple of years before a longer version. It’s a story that very much stands the test of time. It’s probably one of the earlier ‘post-Fall’ stories, and Miller builds an interesting near future society that has pulled itself up from it’s bootstraps to rebuild after a fall. Religion plays a key role, and Miller teases out the story well, as we follow one penitent man who believes to have had a visitation.

I did struggle with this story when I read it a couple of months ago. Here’s what the previous source thought about it.

And finally, a lengthy story that did stand out from the rest of the volume as being one that played with tropes that would be explored for decades to come. There’s a touch of Alastair Reynolds in there, a touch of McCaffrey/de Bodard, and whilst there are some stylistic issues (it was an early story from the then young Scortia) it ends the volume on a strong note. Here’s the previous source‘s take on the story.

I started reading this in January and read most of the stories by early March then had a bit of a gap before sitting down to write notes on the final stories, which I read several weeks or more ago. For the record Judith Merril’s take on the best sf from 1955 has an entirely different set of stories. Go figure…

I’ve a new anthology, with stories from 2018, to read now.. fingers crossed I will return to the 1950s in due course.