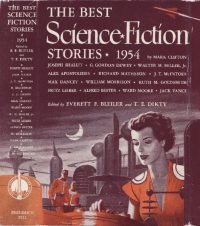 Published in the UK as ‘The Best Science Fiction Stories: Fifth Series’, with fewer stories in that volume. That is the copy I have, until such time as I sell my earlier Bleiler/Dikty to fund the purchase of the US edition.

An intriguing story. A curious title, which we find out relates to Displaced Persons. Clearly, so soon after the end of the Second World War, the issue of Displaced Persons during that conflict was an issue that Vance clearly felt needed much more attention, and an SF story which highlighted humanity’s collective lack of attention to the issue was one way to do that. Here he posits a veritable tsunami of DPs, in the shape of a branch of humanity which has lived a subterranean existence, but who are forced to come blinking and confused into the sunlight of Switzerland by rising magma levels.

After an initial narrative start, the story proceeds with news clippings, showing various attitudes to the increasing numbers of ‘trogs’ who are pouring out of their caves and who are in need of help. Needless to say, some 70 years later, nothing much has changed…. I’m looking at you, Suella Braverman, Nigel Farage and your ilk. [8th Dec 2022]

A strange little tale. Poetical at times, it starts ‘The whistles blew’ and this phrase is repeated several times as the scene is set : a relatively contemporary USA, but one which has embraced the public holiday and has eschewed some of the vices which they see as having spoiled the 20th century, in favour of altogether different virtues. It’s all very nice, in a Big Rock Candy Mountain way, with no sfnal elements in it, so I’m guessing it was written as a counterpoint the the generally gloomy tone of most post-war/Cold War SF of the time.

Fred Lowry is a methodical man, and it is because of this he is able to identify just what on earth is happening to the loose change in his pockets, which never seems to come to the amount he believes it should after careful consideration of his daily spend. With diligent and regular checking on his journey from work, he realises that he loses the tiny bit of change thanks to a cigarette machine on the train platform into which he must drop some loose change, without taking any cigarettes. He confirms this with another traveller, although she believes it to be a gum machine. They approach the machine to investigate further….

A touch of the Twilight Zone!

A very dark, psychological horror (rather than SF) story. A married couple are reluctant to start a family due to the amount of time and bother raising a kid can be. But when a scientist suggests he has a way of speeding up a newborn child’s development, to minimise the tedious and time consuming part of starting a family, they embrace the opportunity. Be careful what you wish for … it soon transpires that hiding his superfast development becomes a problem, and he doesn’t socialise at all well due to the development gap with his peers, and worse still…. [6th Jan 2023]

Walter M. Miller, Jr. The Sower Does Not Reap.

A story that feels much more like current SF than 1950s SF. The protagonist has taken up a 5year contract to work as a labourer on Mars. The pay is reasonable, there is little to spend that pay on, and his plan is to return to Earth a much wealthier man after his stay. However, he soon finds out that the medical enhancements that enable him to breathe on Mars are compromising his lungs, and he is likely to be unable to breathe properly on Earth again. Furthermore, he begins to question just why they are all on Mars digging away..

It transpires that they are building oxygenating plants – several hundred of these are to be built over several centuries, to give Mars an atmosphere something closer to that of Earth. Whilst he clearly will not benefit from this, he is able to come to a personal accomodation with this fact and to be satisifed that the work he is doing will benefit others rather than himself. [6th Jan 2023]

William Morrison. The Model of a Judge.

An intriguing setting – a cake baking competition is being judged on a Saturnian moon. We see the foibles of many of the human inhabitants as they gather to see who will win this year’s competition – or rather, we hear their foibles through the super-acute hearing of the native creature who is to be this year’s judge, who also has super sensitive taste buds. Ronar has benefitted hugely from human medical and psychological intervention – he is no longer the wild, carnivorous creature he once was, but now educated, intelligent, and now a vegetarian. HE whittles down the contestants to a final three, and his winner – a cake baked by a young woman, who Ronar agrees with her husband, is herself very much good enough to eat. [16th Jan 2023]

A strong, impactful story from Matheson, that feels several years ahead of many stories in this volume. It is indeed The Last Day, as Earth is about to be incinerated by an approaching sun. The protagonist has very much made the most of The Last Night – wine, women and song! He decides that he *does* in fact want to spend The Last Day with his mother – he had felt that the threat of having her bend his ear about her Christianity in his final moments was something he couldn’t bear. After a dramatic car ride across town, and a farewell to his old buddy, he meets up with his mom, his sister, brother in law and neice, and they have a nice final meal. The married couple and daughter decide to take an overdose to avoid the imminent catastrophe, and so he and mom sit on the front bench (having done the dishes!) and, to his surprise, there isn’t any lecturing about her faith, and it’s a touching ending as they simply sit and await their fate.

It’s a story that works well today and is very much a forerunner in the post-apocalyptic story that we’re now so used to! [16th Jan 2023]

Moore’s story is similar to Matheson’s in postulating an approaching apocalyse. Nuclear war is upon us, collapse of civilisation is forecast, and fortunately for his family, Mr. Jimmon is extremely well prepared. The station wagon has been packed to the maximum load, and loaded with a very carefully planned range of items for them to see out the future in the woods well away from the city.

He has their escape route planned, and we spend a lot of time inside Mr. Jimmon’s mind – and it’s not the most appealing of places! He has disdain for his long-suffering wife, and he is particularly contemptuous about her inability to look to the future and see that the past is over.

He has very little time for any of his children other than his favourite daughter, who he sees very much as being in his own image. And, a little scarily, we see him as seeing her in another light…

And Mr. Jimmon is insistent that they will not stop until absolutely necessary. When they do finally stop, we find out just how focussed on survival he is – he leaves a gas station with just his favourite daughter, leaving the rest to their fate. And of course, a further reference to the story of Lot in the bible. It transpires that there is a sequel to this story – ‘Lot’s Daughter’, which I will have to seek out.

It’s a great character study, and a gripping read, albeit with quite a horrifying protagonist. [16th Jan 2023]

A good ol’ boy farmer gets regular visits from an alien, and mutually beneficial transactions take place at each visit, and in the end the farmer gets a chance to settle some scores, both with individuals and the governmint, before he heads off for pastures new. Gently entertaining. [19th Jan 2023]

Hmmm, this one didn’t really work for me. But it clearly did for others, including those who evidently commissioned some follow up stories.

The story starts off with a couple of conversations the protagonist, Ralph Kennedy, HR Director, has with employees in his computer firm. One is with a woman who wishes to hand in her notice due to problems with her daughter at the workplace nursery. The other is with a scientists who has made a discovery regarding the ‘learning’ capacit of chemicals that somewhat challenges existing scientific frameworks. The protagonist lets in (it’s a first person story) on a lot of HR and psychology theory that he uses in these conversations. Things get really interesting when the aforementioned daughter is brought in, and it transpires that she is, in fact, a poltergeist. And her demonstration of her powers affects the sample of the chemical on Kennedy’s desk, creating an anti-gravity effect.

The story then heads off on a more humourous slant, as Kennedy is tasked with producing more of the chemical. Top brass from the Pentagon are brought in. And then the story somewhat trails away. After two strong stories from Matheson and Moore, two lighter stories to finish the volume! [19th Jan 2023]