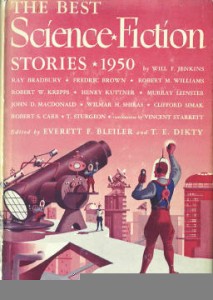 Theodore Sturgeon The Hurkle is a Happy Beast
Originally in The Magazine of Fantasy, Fall 1949

Robert Spencer Carr. Easter Eggs.
Originally in The Saturday Evening Post, September 24, 1949, and variously entitled ‘Those Men From Mars’, and ‘The Invaders’ according to the ISFDB)