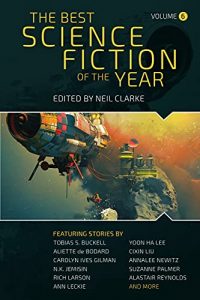 The sixth volume in what is now the longest-running current Year’s Best SF anthology. Due out in deadtree format just before Christmas Day – that’s one of *my* christmas presents sorted out then! (Nov 5th Update : publication date now mid-Feb 2022!) Strahan has published the ToC online, and I’ll put this here for the moment.

21 out of 32 author names ‘ring a bell/sound a gong’ with me. I’d guess that 11 of the 32 have had stories in Year’s Best volumes more than 5 years ago. I did a similar quick and dirty check with Jonathan Strahan’s volume and which scored 17 out of 26 on the bell/gong, and 4or5/26 on the 5-year thing. And that’s all I have to say about that!

30th April 2022 and I realised that I had not in fact got this volume pre-ordered, and so it finally got handed over by the Amazon delivery man today. Of course it’s publication date is 2022, rather than 2021 as it should have been, so just to clear, Volume 5 published in 2020 and Volume 6 published in 2022 does not mean that there is a year whose stories have been missed out, simply that the volume for stories published in 2020 did not appear in 2021 but in 2022.

So what of these stories….

A nice start to the volume. Near future, and a veteran who has two artificial limbs and is generally down on his luck, decides to take on the role of ‘parenting’ a humanoid robot. This involves an unboxing at home of a full-size but intellectually and socially undeveloped personality and raising it pretty much as one would do with an infant. It’s a clever conceit, and Buckell handles it well without getting too mawkish, as the adoptive father learns about himself through this process. [30th April 2022]

Ray Nayler. Eyes of the Forest.
The Magazine of Fantasy & Science Fiction, May/June 2020

Nayler goes far-future and off planet, which pleased me. The first story in this volume was near future, on Earth, and robotic/AI, and I had been disappointed with Jonathan Strahan’s take on the Year’s Best being very heavily weighted in favour of stories of that ilk. Nayler’s setting is very redolent of the planets in Harry Harrison’s ‘Deathworld’ series (of which I have very fond memories of reading in the 70s) with the flora and fauna of the alien planet all too capable of killing humans. We follow a young trainee Wayfinder – one of a select group of humans who traverse the surface of the planet, linking communities of humans who have mostly gone subterranean. As you might guess, she is quickly faced with a challenge, and we have to see if she is up to it. Will it be the making of her? Some nice touches in the story (female protagonists) and the story hits the spot nicely.[4th April 2022]

Carrie Vaughn. Sinew and Steel and What They Told.
Tor.com, February 26, 2020 – and still online

A second far future and off-Earth story, and we’re only three stories into the volume! I enjoyed it thoroughly and you should read it online. But skip over the editorial intro before you read the story. The editorial intro says “..Graff has been keeping a big secret from his closest friends, the captain and crew of a pirate-hunting starship. He expected to die before they ever discovered what he really is. But he’s not dead, and now he has to explain…” So that tells you exactly what the story is about. What I liked about it was the nonCIS relationship, under a lot of strain due to the deceit, the nature of what is being kept secret, and the resolution. It reminded me very much of Jay Lake from bygone days. Eight years since he died, how is that even possible? And WTF about his website?? [8th May 2022]

Also chosen by Jonathan Strahan in his take on the Year’s Best SF, which was published some months before this volume, and I loved the story when I read it there and noted “.. this is a corker and no mistake.” Click here to read my review.

Set on one of the Saturnian moons that has featured less in SF than some of it’s bigger siblings. There are two narratives entwined. One is from an earlier mission to Iapetus, whose crew had only just started to build their base when things got really bad on Earth due to an unfortunate coincidence of a very large volcanic eruption and a very large solar flare. We follow the transcript of one of their crew as she responds to the crisis and reflects on the responses of her colleagues. And the main narrative is from a second mission, sent some decades later, who are trying to find out what exactly happened to the earlier mission. There’s a creepy exploration of the deserted habitat of the first crew, which seems set on killing the second mission crew. There’s also evidence of some form of alien life (although that is left unresolved). A good enough story for me, but it left me wanting just a bit more. [9th May 2022]

Also chosen by Strahan in his take on the Year’s Best, where I read it and noted I wasn’t blown away by it – full review here.

Also chosen by Jonathan Strahan in his take on the Year’s Best SF, which was published some months before this volume, and I loved the story when I read it there. Click here to read my comments on the story in that book review.

I did struggle with this one quite a bit, finding it difficult to engage with, and tbh I skimmed the last few pages, by which time I had lost complete grip of exackerly wtf was going on. There’s some clever stuff in there, and an interesting setting, but I found it a labourious read to start, and never really got past the initial struggle to overcome a heavy dose of opening infodumping as the underpinning science and technology is spelt out in too much detail. And there was one bit of writing straight from 1950s B-movie SF viz.:

“Yes. It does. It means that in slightly less than a decade, I am going to die.”

But the one minor stylistic faux pas can be forgiven due to the world building and complex thinking that has gone into the story. [10th May 2022]

Nice to see Kelly in a Year’s Best again. I’ve got fond memories of my early days reading for Best SF when he was a regular in the likes of Asimovs. Here he takes us to the near future, and a ‘playbot’ which is being tested for the market. The protagonist isn’t all to keen on going on a trial date with ultra-realistic creation, but said creation is his boyfriend’s pet project at his very important job, so he feels he has to do his bit. We follow him on his date, with ‘Partner Tate’ who has boyfriend has designed to look unnervingly like him. There’s a lot of character background and depth in the story, and there’s a bit of a twist at the end, as the true nature of exactly who the playbot is intended to help. [16th May 2022]

A very strong, clever story from Rivera. Spoilers ahead. It starts intriguingly with an extract from a history written by a non human race who are living on Earth and are facing climate change. Very similar to us, but not us. We soon find out why – these creatures are living in a simulation of Earth, being fast forwarded through multiple iterations, as they have proved to be far more resilient to dealing with challenges that they face that the homo sapiens were able to. And they are being made to do this in order to get them to identify tech and approaches to problems to help us in the real world. But as problem after problem are given to them, this race start to wonder whether there is a capricious God behind this. Or something, or somebody else. Excellent. [16th May 2022]

Maureen McHugh. Yellow and the Perception of Reality.
Tor.com, July 22, 2020 and still online

Also chosen by Strahan in his take on the Year’s Best, where I read it – review here

Dilman Dila. Red_Bati
Dominion: An Anthology of Speculative Fiction from Africa and the African Diaspora, edited by Zelda Knight and Oghenechovwe Donald Ekpeki.

Matthew Kressel. Still You Linger, Like Soot in the Air.
Lightspeed Magazine, August 2020

Usman T. Malik. Beyond These Stars Other Tribulations of Love.
Wired, December 11, 2020

Also chosen by Strahan in his take on the Year’s Best, where I read it – review here

Vajra Chandrasekera. The Translator, at Low Tide
Clarkesworld Magazine, May 2020

Sofia Samatar. Fairy Tales for Robots
Made to Order, edited by Jonathan Strahan

M. Rickert. This World is Made for Monsters.
The Magazine of Fantasy & Science Fiction, September/October 2020

Also chosen by Strahan in his take on the Year’s Best, where I read it and thoroughly enjoyed it – review here