Last year, following the sad loss of Gardner Dozois, Neil Clarke became the *only* anthologist of a Year’s Best SF volume (exclusing the SF&F anthologies, obviously). This year, Clarke is now *just* the longest-running Year’s Best SF anthologist, as he has reached volume 5, with Jonathan Strahan leaving his SF&F series for an SF-only series from publisher Saga Press. And that means just one SF&F volume for 2020. 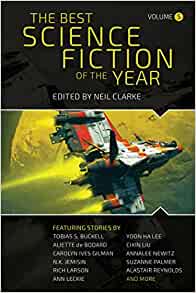 So, what of this, his latest volume. It follows the same presentation as the previous volumes, and of the 11 authors named on the front, I recognise 10 of them FWIW. What I will do is start off now (20th Nov 2020) with a listing of stories and their sources, and work my way through the book, reading stories and putting reviews/summaries/notes as I go along.

A short, simple but effective vignette from Palmer. Humanity is spreading remorselessly throughout the universe, as the native intelligence life on one planet has found to their cost. There are but a half dozen of them left, in the final, small corner of their planet that has yet to succumb to the terraforming. There is one human who has some regret at the costs, and reflects on the loss of the habitat and its inhabitants, but it’s too little, too late.

Not the most cheering of reads, and I’m glad I read it post-2020 US Election and with news of vaccines, rather than in the middle of 2020! (Also anthologised by Jonathan Strahan in his take on the year’s best SF. [27-Nov-2020]

A story I really enjoyed reading. The protagonist is on a mission, to return to humanity’s homeworld, Tellus. He has been enclosed in a temporary skin, which will become permanent at the end of his mission and his return, and he has an embedded AI to help him on the mission. It transpires though that the homeworld hasn’t succumbed to environmental collapse, and, indeed those who remained on Earth have flourished *because* rather than *despite* the loss of the rich elite who fled generations ago. Jemisin drip feeds the reader as the story progresses with information about what has happened, which kept this reader engaged as did the perspective being from the embedded AI, and its responses to questions from its host. Admittedly the solution to Earth’s problems is a little simplistic and idealistic, and conservatives will doubtless object but hey, I’d contribute to a kickstarter to help the rich elite flee the Earth. Also anthologised by Jonathan Strahan in his take on the Year’s Best SF. [28-Nov-2020]

Mercurio D. Rivera. In the Stillness Between the Stars.
Originally in Asimovs, September/October 2019.

Winner of the Asimovs Readers Poll in the Novelette Category for 2019. It’s a story of two halves. I liked the first half – the setting (massive spaceship en route to New Earth using alien tech) and the setup (a psychotherapist, with guilt over leaving his young son behind, is brought out of coldsleep to help with another passenger having problems with guilt over an extramarital affair). Instead of the second half being a psychological exploration of guilt in these circumstances, there’s some ‘tommy rot’ (as we call it in the UK) about passing through a gravity wave that enables creatures from another brane universe to pass across and latch onto people’s guilt to substantiate themselves as demonic creatures of the shadows. And the second half becomes a Stephen King-like horror story (apologies for my horror references being some 30 years out of date, I never did get into horror to any extent after a few early King novels). The guilty passenger gets chomped by the monster, but the protagonist faces up to it and survives, but in aborting his trip at a layoff out near Pluto, he chats with an incoming passenger who (as tends to happen in horror stories/films) *also* has guilt over leaving her daughter behind, and who (we see in the final paragraph) is going to have the horrors during her voyage. The protagonist turns his back on them and heads home. Not the sort of ending that you find in SF although the kind of ending you get in horror movies/tv series, setting up more horrors beyond the conclusion of the story. [28-Nov-2020]

Karin Lowachee. Sympathizer.
Originally in : “Do Not Go Quietly : an anthology of Defiance in Victory’ (ed Jason Sizemore and Lesley Connor, Apex 2019.

An interesting story, though missing just that little extra to make it into a Year’s Best, IMHO. The story : the expanding human race have come across an intelligent species who are mining on a planet’s moon, and the commander of the Marines on the human vessel disobeys the overall leader’s order to kill the aliens. She faces off with the captain and has to make a decision between loyalty to the human race, or remaining true to her moral code and refuse to murder. She decides on the latter, and her marines are loyal to her. I was slightly put off by a plethora of similes in a couple of sentences at one point, and in a few cases there were a few breathless paragraphs, which read a little awkward. But overall the story moved along rather too quickly and simply for me, and the dramatic ending felt a little clumsy, and I could easily believe it was taken from a Netflix original tv series or somesuch. Evidently it’s a story from the author’s ‘Warchild’ setting which looks to be a Young Adult novel, and maybe that’s the case with this story and the reason for this Old Adult not really getting enough from it? Maybe a YA who loves the book series will find this story a big treat. [30-Nov-2020]

A story by an author new to me. The author bio states that she has played both OL and DL for the Cleveland Fusion woman’s tackle football team, so I was liking the cut of her jib already. And the story gave me as much pleasure as watching Aaron Donald knock a QB on their backside. Her story runs smoothly and effortlessly with some good characterisation and dialogue, as a stowaway finds that she might have a way out of the predicament that the ship is in. And it’s not Scientist Fiction where the solution is an obscure scientific or technological thing, it is, as you might guess from the title, knitting that is going to be the solution. And as an aside, knitting was my mum’s thing and she’s been gone some 25 years now and the story gave me an opportunity to dust off some memories and think about that Kaffe Fassett she knitted me back in the day. I try not to think of the knitted woollen balaclavas she knit in the 1960s when I was a young boy, as those itched to high heaven. [30-Nov-2020]

This short piece had a retro-feel to me, very much the kind of story that was popular in the 1950s. There’s no real ‘story’ as such – a young man gets a phone call from himself from the future, a future where climate change has wreaked havoc. His future self passes on details of a technology which will save the future from the fate. Problem is, having resolved to promote this technology, there’s immediately another call, from another future self, who has to report unintended consequences (of a disastrous nature) of that future tech. This new version of himself in a new future, has his own technology to pass back down to his earlier self, to save the planet. Problem is, that technology is also doomed to unintended consequences. And so on. So the story is a simple idea, with dialogue between the young man and his future selves, some extrapolation of potential ecological solutions and their flip sides, but not a whole lot more. [24-Dec-2020]

From a collection of stories in which space farers have to overcome a tricky problem to survive. The tricky problem in this story is of a cold equations type. The story very much feels like an Alastair Reynolds story. Far future humanity, post-something, where an organic spaceship from a matriarchal society has to escape some hi-tech hunter killer vessels who are programmed to destroy anything resembling technology. The Mother Superior has to work out how to flee a nearby hunter killer without giving away any evidence of their technology. This leads to some tricky math, especially as there are some male stowaways which skew the math. There is pressure on her from others to initiate a protocol which would have the males on board jettisoned (there is a small crumb of comfort for them – they would be given the opportunity to have a wank before that happens). However, with a bit of biology, rectal thermometers, and restricting activity, there is a window of opportunity. A good story and characterisation and I’d be happy to read more from this setting. [14-Jan-2021]

Rebecca Campbell. Such Thoughts Are Unproductive.

Kali Wallace. The River of Blood and Wine.

Dominica Phetteplace. One Thousand Beetles in a Jumpsuit.

Tegan Moore. The Work of Wolves.

Ray Nayler. The Ocean Between the Leaves.

A.T. Greenblatt. Give the Family My Love.