The Ant-Men of Tibet and other stories. Edited by David Pringle. Big Engine, 2001. 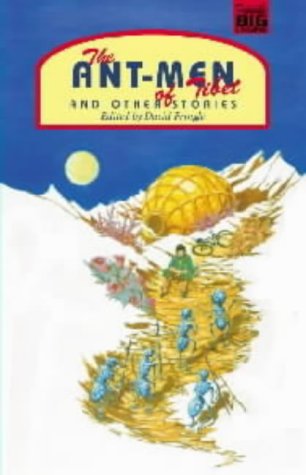 The Ant-Men of Tibet. Stephen Baxter
Originally in Interzone #95, May 1995.

Baxter pays a classy tribute to HG Wells’ ‘The First Men in the Moon’. He has done this previously – with the novel ‘The Time Ships’, which was a sequel to ‘The Time Machine’, and the short story ‘The Columbiad’.

In this story young Tommy Simmons, ten years old in 1900, is at the seaside with his family when a strange object appears at the water’s edge. A ragged figure climbs out of the spherical object and staggers towards the town, leaving the young boy free to explore the inside of what is a most interesting vehicle.

Boys being boys, young Tommy accidentally sets the space ship (for that is indeed what it is) in motion, and soon finds himself undertaking a most spectacular journey. He finds himself on a strange mountain top, which he first believes to be Tibet.

However, he begins to find out that he is much further from home, as we find out at the ship is the creation of Cavor, and the great distances it is able to travel are due to his invention – the gravity-defying Cavorite. And the creatures are none other than Selenites!

Baxter’s story ends on a grimmer note than might be anticipated, as the Selenites are experimenting with cloning, and are using nano-tech to threaten the very Earth.

Alastair Reynolds has moved quickly from short, hard SF in magazines to very long, hard SF in novel format. This early story of his is tight, compact, and claustrophobic. A scientific base in the Antartic finds their mundane work overtaken by more far-reaching experimentation by their company.

One half of a Franson Pair is deployed on the base, in an attempt to instigate near-instantaneous communication with the other part of the Franson Pair, located on the Moon.

The use of quantum mechanics in this way proves to be devastating, with the Antartic camp cut off from the outside world, and the scientists on the Moon facing an even more calamitous situation. Desperate times call for desperate measures.

A solid story, mixing science with action in a nice balance.

Beckett has become a regular contributor to Interzone in the past decade, although it has to be said that for the most part he hasn’t IMHO developed a great deal since his ‘La Macchina’ in issue 46 in April 1991 (collected in Dozois’ 9th).

In this story a far future Earth sees one warring nation taking a major risk in freeing from a century long imprisonment an infamous traitor. He claims immortality and godhood, which is not believed, in spite of the evidence. He is open that any support he gives to this warring nation will be equally translated in one shape or another to support for the other side. In the long, long millenia he has seen empires rise and fall.

True to his claim, he does ensure victory, but at a high price.

Keith Brooke is behind the excellent InfinityPlus website, and also writes short SF (having published a couple of SF novels at an early age).

Here he vividly describes the challenges facing one Joseph Wheatley, employed by the local Collector of Customs to patrol the shores between Beaumont and Harwich, seeking smugglers and their contraband.

The historical description is well handled, and stands up well in itself. The sfnal elements intrude initially when contraband is found which includes an aquatic girl – not quite mermaid, but not quite human. Further to this, Joseph Wheatley finds a very different, aquatic, world beginning to overlap with that of his own. He has to struggle in both worlds to help put right that which has brought the two worlds together.

A humourous take on time travel. A young man is visited by an ethereal figure from the future, who claims a mission to persuade the young man to kill himself to ensure a better future for humanity. The figure from the future, Alfred, tries his best to persuade him that he is carrying a disease which, if passed on to any offspring which he may sire, will be calamitous.

Probably the weakest story in the collection, and a curious choice to my mind. A post-fall Earth, and some old hi-tech is found (in this case a steam train). The local rural population endeavour to bring the train back to life, and an alien spaceship lands nearby and is able to help them. The alien ship and the steam train merge on a nano level, and thus Civilization is brought back to Earth. It could almost be a shaggy dog story, except that the name of the steam train (Civilization) and its potential to begin humanity’s path towards civilization, is pointed out during the story.

This appears to be Caines only sale to the professional magazines, and is otherwise a small-press writer. This story feels very much of that ilk.

A ship sent out to establish trading operations with the planet Niveleur nearly comes to disaster when approaching the planet. The ship’s squidlike navigator takes umbrage at having its professional capabilities questioned, but worse than that, something most peculiar has happened to the planet – there is no trace of intelligent life on the planet, nor trace of there ever having been any.

Disappointed, and with the tight-knit team split asunder, the crew return to base, where a less than warm welcome awaits. However, matters become much more serious when it transpires that a menacing nano-dust which caused them the near fatal problems when in the system has in fact begun to wreak nano-havoc. Can the crew re-form and escape before a most unpleasant end?

An enjoyable story, with faint echoes of Iain M. Banks, from an author of whom I am unfamiliar.

The introduction attests to the versatility of Molly Brown, who writes successfully across several genres. This excellent story very much supports that view. More of a ghost story than SF or fantasy – a young businessman in Soho finds his ancient Chinese grandmother a bit of a problem at the best of times. However, at the worst of times she is able to summon spirit help to help him. And in helping him she is able to release herself.

One of the good burghers of Transylvania is worried when a visiting official from party HQ raises some uncomfortable issues surrounding the lack of progress in moving towards the collective approach to farming. And furthermore, that castle on the hill …. her enquiries put her in danger of becoming a pain in the neck.

One of the stories in Brown’s ‘Tartarus’ series, which continue more recently in the Spectrum SF magazine.

Earthman Connery is on the tail of a semi-mythical creature, the Vulpheous, initially for reasons not clear. Setting up his scientific material in a volcano crater, he is joined by an indigineous female, who has a similar interest in the creature.

As their reasons for seeking the creature are revealed there is a major conflict of interest for the Earthman. Caught between a rock and a hard place, he has to make a choice. And in Brown’s story there is no macguffin or twist in the tale to come to the rescue of Connery. A choice must be made.

A well-balanced collection of good stories from Interzone published between 1992 and 1998. Only ‘Civilization’ felt below-par to me, although equally, none of the stories were asbolutely brilliant.

Most of the stories are by ‘young’ British writers, and none have been reprinted since publication. As I wasn’t a reader of Interzone between these years it could have been difficult to come to a conclusion as to how representative they are. However, by using the Best SF database, I identified the following stories from Interzone during this period which were collected in the annual anthologies by either Dozois or Hartwell :

Now this list contains some very, very strong stories, and the majority on this list are, to my mind, ahead of those in the collection in hand. Which isn’t to say that ‘The Ant-Men of Tibet’ isn’t a good collection – which it is – but to say that it clearly shouldn’t be seen as a ‘best of Interzone’ collection (it makes no such claim). I’m certainly glad to have had the opportunity to read the majority of the stories in the volume.

Thanks are due to Ben Jeapes of Big Engine of publishing the volume, the intended original publisher having ceased operations. You can find the Big Engine website here.