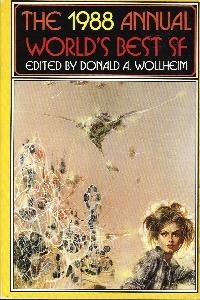 ‘Entities’, aliens with attitude, take over Earth, leaving many of its inhabitants doomed to forced-labour of one kind or another. ‘The Pardoner’ has the electronic wherewithal to assist a lucky few to avoid the worst fates.

A scientist implanted his dead daughter’s brain pattern onto one of the chimps he has been raising and studying. The chimp, to all intents and purposes the daughter, battles for her survival.

Crying in the Rain. Tanith Lee.
Originally in : Other Edens

Post-holocaust : acid rain (and how!), short life spans, with the lucky ones living in bubble-domes.

Multi-perspective on a scientist who finds life on the face of the sun, and who becomes part of that life.

Angel is an outcast from another planet, who befriends a human hemaphrodite. Angel is finally hunted down by a fellow ET, leaving the hero/ine to find other such outcasts.

In the face of difficulties, humanity encounters a deity-like race whom they follow away from the Earth.

All Fall Down. Don Sakers.
Originally in : Analog

The Hlutr, a race of tree-hilfs, come to the aid of humanoids.