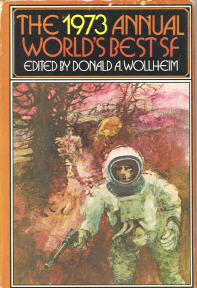 Far future in which mankind is controlled/governed by SUM, an AI. SUM offers life after death, but the protagonist, grief-stricken after the death of his love, petitions the Dark Queen, the representative of SUM on Earth, to recreate her. (Follows in many respects the Greek tale of Orpheus and Eurydice.)

A deceptive story about a time travel experiment which goes badly, badly wrong, with enormous implications for humanity. It spans several centuries of post-holocaust, bookended by John Delgano’s desperate attempt to get home. The contrast of the intense personal struggle of Delgano and that of the survivors of the holocaust gives the story a big impact. One of my all-time favourite SF stories, I’ll have you know.

The Gold at the Starbow’s End. Frederik Pohl.
Originally in : Analog

Desperate times, desperate measures. A carefully selected ten person crew head for Planet Aleph, Alpha Centauri against a backdrop of rioting and political and economic difficulties. Their ten year journey is intended to give them lots of time to think and to stretch the limits of their minds. In fact there destination is not Aleph, but a more post-human destination. Are they humanity’s saviours?

Ernie walks up and down streets, giving those with whom he has contact the (dubious) benefits of his good health.

Far future, with post-humanity in both hive-mind and subterranean existence. As the planet reaps the benefit of a return of marine life, many lives are changed, particularly fat old Drum who is headed for Temporary Suspension due to the economic difficulties.

A project to map the Earth in close detail appears to be having a deletrious effect. A native American geologist/geographer introducted to the project has a key role to play.

A blues legend is helped on his way by a time traveller.