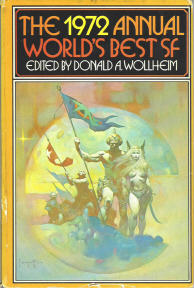 Short, unsettling story. A night-shift office cleaning duo have a visitation from a shadowy bat woman who has an offer to make. Deal done, the creature leaves via the balcony, flying into the world outside, which offers a disturbingly strange contrast to the office.

The Bear With The Knot On His Tail. Stephen Tall.
Fantasy & Science Fiction.

The Bear in question being the constellation from which a musical message of distress appears to emanate. A ship, including a lovey-dove husband and wife team, arrive on planet mere hours before it’s sun goes nova and destroys the planet.

Contact is finally made with the egg-like inhabitants in a scene from which Close Encounters could have drawn inspiration – with a crew member using a guitar to match musical notes with the aliens.

It being so close to the sun going nova (bnnnnng*) there is (not made clear why) no chance of evacuation, and the ovoids appear to be succeeding in preventing the crew escape. However a consignment of ovoid eggs (as in chicken eggs) and documentation is loaded just in time.

A somewhat clumsy and misleading title for a lovely story.

Philip Jose Farmer’s ‘The Sliced-Crosswise Only-on-Tuesday World’ (in Terry Carr’s collection of the year’s best in this same year) faces the challenge of overpopulation with a 1-day per week solution. Coney proposes a 1 year out of 3 solution, with 2 years spent safely stowed away vicariously enjoying dangerous activities delegated to ‘remoters’ – metal boxes on legs.

Pentreath is a Cornish fishing village paying host to coachloads of remoter tourists. One ‘remoter’ couple are paying a return visit, having holidayed there in ‘real life’ many years previously. One of the locals who makes his living from the faux attraction is given food for thought by these lovers.

Priest slowly, tantalisingly, reveals an almost PKDickian take on reality (or reveals as much as is ever revealed in such stories). Initially an off-planet observatory is studying the local flora and fauna. However, the observers are themselves being observed in a scientific study which is looking at the effect of lack of contact with news from Earth. But when the subjects of the experiment realise that all is not as it seems…

All Pieces of a River Shore. R.A. Lafferty.
Orbit 8.

A standout story which would be a serious contender for a place in my Top 100.

Elegantly told tale of carnival side-show oddities: extremely wide paintings typically billed as being The Word’s Longest. One collector finds several which are most peculiar – they show scenes of a river in startling detail, and which….

Only slightly spoilt IMHO by the last few sentences which make crystal clear the provenance of the ‘paintings’, rather than leaving it to the imagination of the reader.

Unbeatable in the sense of wiping out other species and not joining a wide federation of races? Perhaps a somewhat overblown opinion of our abilities?

Herbal remedies concocted by a very old Jewish lady appear to be particularly successful in treatment the ailments of her family and friends, and offering longevity. A grand-nephew, a chemist, dabbles and experiments.

Flemish SF – and there’s not a lot of that about (although some of the poor SF can make me spit!)

Harvey Lonestorm is victim of a cosmic timestorm, which sends him helter skelter into a crazy situation where far-future humanoids appear to be tampering with history. Harvey intervenes (the kind of intervention which Arnold Schwarzenneger tends to do in his films) and uses the strange device to remove from all the evildoers throughout history, leaving him to return to a pastoral and peaceful Earth. Oh joy. Or not.

And my apologies for the appalling pun a couple of sentences ago.

An Earth-Moon-Mars-Sun conjunction offers a rare opportunity for observation. However, that beauty and the scientific data gathered rather lose their thrill when the observer….

Gus Rosenthal finds himself back in his old yard, looking in on his parents and his young self. He desperately wants to make his own childhood a happier one, to make up for what he feels he lost in his youth. But you should never go back.