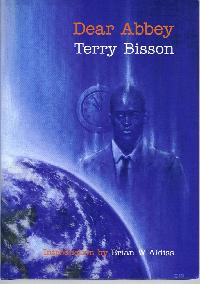 Big SF from Bisson, who poses a couple of Big Questions in a deceptively slim volume. Slim in the usual dimensions. But in another dimension it is a quite different proposition – this one will stick in your memory for a long time. The Questions : Are We Alone? Whither Humanity?

He pitches us headlong into what could be described as a Time Travel tale, although that labels feels like a dis-service, as the majority of Time Travel stories might go to the far future and attempt to dazzle with far future tech and What Ifs, (or increasingly banally back into Alternate History territory) whereas Bisson takes a resolutely human, humane and Humanist approach.

Two unlikely companions, Cole, a Black American professor, cynical and world-weary, and Lee, a mathematical genius escapee from China are offered a chance to travel to the future and to receive a scientific answer to the threat that humanity currently poses to our future and the future of Earth itself. Are we drinking in the Last Chance Saloon, or can the two protagonists pluck a ‘Get Out of Jail’ card from the future to ensure that we as a race, and Earth as a planet, do actually have a future?

The story starts in first person, with the black American, Cole, going nowhere as an academic at a Community College, bemoaning his broken relationship and his life in general. His ecological activism in the past offers him this unique opportunity, and he finds himself setting forth with Lee and his Pocket PC, which is all the tech the story features.

After the first time travel jaunt, the narrative slips third person, which has an unsettling effect on the reader. Cole and Lee pay a number of short visits to our future, the odd couple holding hands on a swinging garden bench in a strangely symbolic image that stays in the memory. Over several increasingly far-future trips Bisson teases by giving glimpses, vignettes, with occasional spine chilling references easily missed (in a far future still-Bohemian Paris, population control is managed by individuals being ‘cancelled’).

Humanity manages to survive several potential Endings, and these big escapes are matched by other, humble and yet affecting glimpses – on one visit we hear that there are no longer any dogs. Man’s Best Friend is no more, which has an unnervingly emotional impact.

And at other points there are the simple things of life, a glass of wine on a verandah of a cottage with a view, and some jazz. Bisson eschews longevity, nanotech, and genmod, staples of far future SF, for the simple loving glances of an elderly couple able to spend some time in their waning years together. Colonisation of the Solar System is seen as a minor dalliance – the future lies with the soil of Earth under our feet, not the dust of otherwise dead planets and moons.

Two far-future encompassing AIs vie at various points – a Gaia-esque ARD and an Internet-like RVR (Man’s Best Friend ‘Rover’ has been replaced by an IT equivalent RVR). The former largerly tolerates and mostly ignores us, the latter is forever there, whispering in our individual and collective ears.

But the key is the search for the Old Ones – the travellers are forever looking for the wise ones at the end of time, and the search for another intelligent species out there in the echoing spaces.

The chilling final visit to the future, to the Last Man on Earth, whose corpse lies next to a now-cold fire is one of those scenes that will stick in the mind for quite some times. The echoing horror of the mourning for the race that is no more is, for my money, on a par with the snaking dance of the children leaving forever in Arthur C Clarke’s ‘Childhood’s End’.

Bisson’s conclusion is simple. Are We Alone? Fundamentally yes. Alone and without guidance from any god, any future intelligences, and any alien intelligences. And it is therefore down to us, as individuals, to ensure that humanity survives because of humanity, and does not fail because of failings in that humanity.

And the story closes Cole returns to his flat, glad for the warmth of a canine welcome.

So, a resounding recommendation from me on this one, with PS Publishing continuing their strong run of form. Read it and weep. If you can’t afford the cost, (and dude, it’s signed by both Bisson and Brian W. Aldiss who does the introcution!) wait until 2004 and you’ll see it in at least one of the Year’s Best Anthologies.