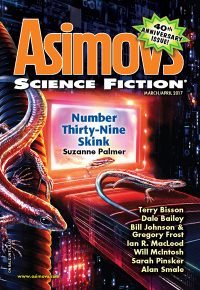 A clever story from Palmer, featuring an AI protagonist.

The AI in question is on an alien planet carrying on it’s task to create and 3DPrint out living creatures, as part of a mission to colonise an alien world.

‘Kadey’ is alone and a little confused. All but one of her crewmembers left abruptly some time ago, but her ‘wrangler’, Mike, stayed on. His terminal illness meant that he left her shortly afterwards, and the story follows her moving across the alien landscape, confused about what has happened and trying to make sense of it.

As the story progresses she finds out more about the planet, and the reason behind the sudden departure of the humans, and there is a dramatic conclusion when Kadey is confronted with a couple of options, one of which does not bode well for the planet….

Palmer makes the AI an interesting and believable character.

The mid-story interruption by the author bio on my Kindle, and the in-story reference to 2001 : A Space Odyssey, didn’t get int he way of my enjoyment.