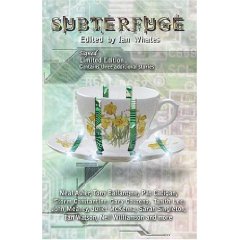 Ian Whates latest collection under the NewCon imprint comes in a variety of flavours : paperback, hardback, and special (extra stories!) limited-edition, signed hardback. It is the latter of these reviewed here.

As with the other volumes, there is a theme to the collection, as evinced by the title.

John Meaney. Emptier Than The Void. Meaney contrasts the unknown in deep space that is dark matter, and the darkness that can lie in the souls of men. Or, rather, the darkness that can be induced into the brains of men, through on psycho-physicisty who is tricked into doing experimental research in an MRI scanner which results in a dark hunger that can only be quenched by absorbing those he kills.

The force that controls him is controlled by men in suits, and whilst on a mission to the Far East he finds (as is oft the case in such thrillers) that there are matrioshka-doll-levels of deceit.

Jaine Fenn. Collateral Damage. Malia is a young girl from the downside, who has a chance meeting with an older woman from topside. This odd couple become friends, despite young Malia’s new role as an Angel, and enforcer of the will of the people. When the older woman’s husband does the dirty on her, and Malia’s first contract comes up, it seems a perfect opportunity for her two kill not only the politican who has fallen below the standards required, but also the politican’s lover, coincidentally the philandering husband. But of course it is too perfect a co-incidence, and the young girl realises that she has been subtly manipulated.

Gary Couzens. Jubilee Summer. 25 years on, a woman attends a conference near her childhood home, causing memories of those days to come flooding back, especially the connection she made to a young boy who died that punk summer, who believed that the pair of them were very much part of another place. Is she really another girl, another planet?

Juliet McKenna. Noble Deceit.Classy fantasy in which a young boy finds that the power that he has at his fingertips to create living things is a power which much be kept secret, but which may be called upon in future years for the good of the city. And true enough he is commanded to the palace to deal with a threat to their king. Can his power extent to creating a facsimile of the king, to fool those who would overthrow him. Having struggled for three days to crate the simulacra, a growing intelligence behind the eyes of that which he has created makes it difficult for him to despatch his creation to smoky oblivion once it has fulfilled its purpose.

Pat Cadigan. Tales From The Big Dark Lie of the Land. Cadigan returns to the setting of her ‘Among Strangers’ from the previous NewCon Press anthology ‘Dislocations’. The setting is an environment in which a wide variety of lifeforms, abducted by the Dacz.va from their home planets, live out their lives in the Big Box under the eye of Maintenance. The protagonist is unsettled by dealing with one new arrival, who is pregnant, but also by having been assigned to deal with her lover, purportedly an escapee returned to the Big Box, with his mind wiped.

Neil Williamson. The Moth. An atmospheric piece of psychological horror, as Markady Veitch flees to the deserted city of Karpentine. He has been spying for one of the ruling classes, Lady Moraine Otterbree of the Inksmiths, but has been found out. Clutching a note in her hand, he spends a scared night in the grey city, a large moth flapping at the window driving him to distraction. He is hoping that the lady will honour her word, but it is in her words, the hidden words that come to light, that he realises the desperation of his situation, an expendable pawn in a bigger game.

Tony Ballantyne. Underbrain. Another excellent piece of inventive world-building, deserving of a larger canvas. Andeel doe Resthispil has achieved a sudden, dangerous notoriety in questioning the beliefs on which their society is based. Can the true word be safely questioned. She heeds a call from her brother-in-law, a spider farmer in the country, and he reveals to her that she is indeed right in questioning the received wisdom, but does not realise the extent of the subterfuge, nor the danger in which she has placed herself. He reveals the ‘underbrain’ of one of the large spiders in his barn, and the extent to which humanity has been the puppet to offworld masters becomes clear.

Tanith Lee. Underfog (The Wreckers). We hear the tale of a lonely cove, whose fog-shrouded shore, and jagged rocks hidden under the sea, have lured many a wretched ship and crew to their death. The villagers have come to accept these regular wrecks as a source of goods to be used and bartered, and woe betide any who survive the wreck and the stormy seas, for none shall live to tell of the role the villagers play. A young man tells of his years on the shores, until the recent deadly night when a ghostly vessel came to the cove, and lured the villagers themselves to their death.

Sarah Singleton. They Left the City At Night. A young woman leaves the frozen Russian city, and her child, to be with the man she loves, who has been exiled. There are those who help her on her way, but having got lost, she spends the night in a deserted mansion. In the night that follows she is visited by several dreams, and in true horror story style, it is in the house that she will remain, as she watches another take her place and leave the house in the morning.

Steve Longworth. The God Particle. A lighter tone, as scientists working on the Large Hadron Collider find that they are successful beyond their dreams, and are visited by a particularly noteworthy gentleman.

Una McCormack. The Great Gig in the Sky. Memories of bygone years come flooding back to members of a rock band who are bemused to find a tribute band in town, and the tribute band are having more success than they had in the first place. The long-missing bassist continues to play a pivotal role in the lives and relationships of the surviving members.

Nik Ravenscroft. Time, Like and Ever-Rolling Stream. A young, gangly boy is sitting beside a stream, pills in his blazer, contemplating the futulity of his life. He is given pause for thought as a tall, gangling man, who seems to be on the same wavelength as him, talks to him about his future and what might happen, and gives him a steer in a different direction. A helpful word from his future self, the boy, a tyro-physicist believes. As he heads off, his future clearer, we then find out that it is an altogether subtler inter(pre)vention that has taken place.

Dave Hutchinson. Multitude. A previous NewCon collection had a story from Hutchinson in which a rural pub is paid a visit by elves, in a near future England where their kind have returned to their rightful place, and everything is pretty fucked up. Here he returns to the same milieu, but sets the story in a rural pub which is, er, visited by some elves. More of the background is explained, and the protagonist, the pub landlord, has some skeletons in his closet. Actually he has several hundred skeletons, many in Eastern Europe, littering forests and sports stadiums. It makes him a particularly unnattractive protagonist, and it’s a challenge to welcome his stay of execution at the end of the story, which may offer humanity a chance to fight back against the elven hordes.

Neal Asher. The Rhine’s World Incident. I was of course pleased to get my teeth into some Science Fiction at the point, although in fact it’s one of the weaker stories in the volume. Set in the author’s Polity setting, a small group manage a devastating attack on a city, and flee to avoid capture. They end up being helped on their way by a group whom they suspect of betraying them, and torture is used to identify whether they are safe. In fact, their enemies are already amongst them, as is revealed with gory butchery at the end. The final scenes would work a lot better in a movie – running from one room to another in reponse to blood curdling screams, only to find dead bodies, and catching glimpses of -something- slithering into the ventilation ducts. There’s more than a touch of The Thing about it, and without any protagonists to engage with, it comes across as fairly routine.

Nick Wood. Thirstlands. An altogether more alien setting is provided by Wood, unless you’ve spend time in Africa. In a world in which water is becoming increasingly precious, a journalist finds his trip to the Victoria Falls is a waste of time as the rains have not come, and the waterfalls remain a shadow of their former self. In returning home, to his wife, and their haven of safety in an area of drought and poverty and earth, we find out about him and his reaction to the challenges in front of him, and in front of humanity.

Ian Watson. Vile Dry Claws of the Toucan. One of the bonus stories in this volume, a short, wry piece in which the remaining fragment of an alien civilization is a question of debate amongst academics – is it a chronicle of events, or a horror story?

Ian Whates. Peeling an Onion. A geneticist is pleased to land a job with a Cambridge-based genetic engineer company, and quickly climbs the career ladder until he is part of the elite group of researchers. And then he is let into the details of their secret work : chasing down the piece of genetic code that enables a very, very small percentage of the population to get their way through influencing others.

Storm Constantine. Angel of the Hate Wind. A big criticism of a lot of fantasy that I decline to read is that it has a cod-medieval setting, with very little imagination used by the author in creating a different world or society. Constantine shows just how it should be done. In fact, she almost goes too far, with the opening pages containing a wealth of new words, phrases, ideas, settings and such. A woman relates the story of her erstwhile companion, Jericho, and how he lost his way in falling for Dendria, a variant who is mostly human. Sufficiently human for the couple to be intimate, as is memorably made clear. Jericho is smitten, and against the advice of his friend, summons assistance from higher powers to ensure that Dendria is smitten with him. But he fails to provide those powers with the gratitude for the service he has begged, and there is a cruel twist in the tale when his wish is carried out.

Whates has provided another strong collection, bigger than previous volumes, and worth looking out for. The standard of writing, and the invention in the stories, is almost uniformly excellent, and is strongly recommended.