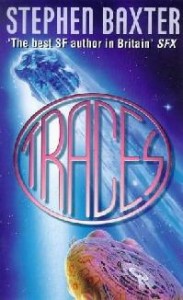 A couple of years ago I reviewed Baxter’s ‘Phase Space’, which collected stories set around his ‘Manifold’ novel sequence, and others around alternate histories of space travel in the 60s/70s/80s. The stories in question had been published originally between 1997 and 2003, and in effect followed on directly from this collection, which features stories between 1988 and 1997 and which are primarily variations on a theme : that theme being ‘what if’ ponderations on alternative paths space travel and powered flight may have taken. Baxter’s other collection, Vacuum Diagrams, collects stories in his Xeelee Sequence.

Baxter is one of the writers I most admire, the ony problem for me being that he writes stories far faster than I can ever read them, so the chances of me every reading the majority of his work is becoming progressively and exponentially unlikely.

Worthy of note is the number of stories which appeared in Interzone orginally and the role that august magazine has had in developing his career.

A two man crew of a probe beyond the Oort Cloud are an odd couple, the scientist being a minister of the First Church of Christ the Holistic, and the pilot, Brewster, from a family of lapsed Catholics, happy to humour his beliefs. Baxter uses the two to air some contemplations on the role of religion and faith once humanity has got beyond the confines of our planet, but what the pair find out in deep shows just how speck-like humanity is on a galactic scale, and this is too much for the believer to stand.

A detective drops into a simulation in which a virtual Lord Byron has been created. It is clear that the virtual Byron has become very much self-aware, in complete contravention of AI rules and regs. Within his digital reality it transpires that Byron has dreamed of another reality, and when given the choice of what should happen to him, it is this ancient world which is his choice.

The Droplet. First published in Other Edens III, 1989.

A British scientist has been Stateside, working obsessively on a TeV Linear Collider, and his experiment yields a huge reward – a ‘stablizing droplet of inflating quagma’ – which (trust me on this), gives us the opportunity to study an infinite variety of alternate physics.

No Longer Touch the Earth First published in Interzone, 1993.

Oberleutnant Herman Goring, feted fighter pilot from the First World War, is in the Antartic, in a race to reach the pole. But there is more to the story than this, as the world in which he lives is an Aristotlean one, with the Earth the centre of the Universe, and the South Pole the location for the central axis on which we spin.

A slightly more mainstream alternate history, with the First World War having had a different outcome, with a MittelEurope dominated by the Axis Powers. With the rise of Japan in the East, those Axis powers decide that a pre-emptive strike, taken through an orbital jet, is the way to suppress a threat to their global domination.

A Journey to the King Planet. First published in Zenith 2, 1990.

The discovery of small amounts of anti-matter (anti-ice) enables a rocketship trip to Jupiter. However, political opposition to the flight results in the ship taking off earlier than anticipated, with a Frenchman who opposes the flight at the helm. However, the bravery of the small number of men also on the ship enables them to restore the ship to their control.

Out in deep space a massive explosion wrecks a spaceship, and the ship’s doctor is pulled into a two-man escape pod by one of the engineering crew. The engineer is far from pleased with the doctor also pulling in a third man into the two-man escape pod. This is a cold equation that a toddler could work out.

The third man, Windle, seems to take a perverse pleasure in needling the hulking engineer, but he is able to balance the tricky equation, by means of a route through a humongous whale-like creature.

Another teasing variation on Baxter’s exploration of just how different humanity can actually become whilst still remaining essentially human. Here we follow the journey of two presumably microscopic humans living inside the body of some unexplained creature, with those higher up the bloodflow far different from those downstream.

Same trope as the previous story, but with humanity having taken various aquatic shapes to live in an ice-bound Earth, in which we follow one who is a True Human, as opposed to being a Basker or Angler.

Picked up in Hartwell’s ‘Years Best SF 2’, in which Mars is the target for a Wellsian space journey, and it being a far greater challenge to reach the Red Planet.

A more straightforward Alternate History, in which the work of one Bill Frost on his patented Flying Machine is more successful than was the case, leading to an arial bombardment of the Rt Hon PM.

Weep for the Moon. First published in Dreams, 1992.

In which Glenn Miller, at the controls of the plane on which will be his final flight, is paid a visit by someone from the future, in the shape of his brother, to urge him to abandon the flight, as his death will have a shattering impact on the future of humanity.

One of the weaker stories in the volume, and, interestingly a story from a small-press publication. The death of Superman is handled in a more bureaucratic manner.

Something for Nothing. First published in Interzone, 1988.

The earlist story in the volume, which probably shows. A bickering crew (of the type regularly found in early Asimov stories in the 30s/40s) come across a scientific anomaly, and the least unpleasant is disposed of in a highly scientific (if somewhat implausible) manner.

In the Manner of Trees. First published in Interzone, 1992.

A ship lands on a planet to find the settlers have undergone major changes in order to survive the peculiarly volcanic nature of the planet, taking on bacterial characteristics. The central image of bizarrely shaped naked young children with distended bellies, is quite bleagh.

A story which would have been more suited in the ‘Phase Space’ collection, as it is a musing on an alternates to the space race of the 60s. Here we see what might have happened if the Cuban missile crisis had actually resulted in global war, with one Wally Schirra orbiting Earth and witnessing the destruction. However, he also witnesses the heavans truly opening, and the hand of god restoring humanity to a previous history track. Schirra finds himself talking with ground control, but on an Earth this is just slightly different from the one he left.

Ditto above, this time with Gagarin heading off to Venus, on a politically inspired, albeit inevitably one-way mission. However, we find out that there is an intelligence lurking on Venus which enables him to return on a chariot of fire.

Ditto above. A Dozois 15th collectee, with six different Moon Landings, including a pipe-smoking ‘What Ho, Chaps’ English version.

George and the Comet. First published in Interzone, 1991.

A return to the far humanity future Baxtermeme, although we see, close up and personal, the sacrifices that humans have to make in alternate bodies. George finds himself in a simian Adam and Eve scenario, although his Eve also started life as an Adam, and these two chaps have to learn to handle that.

Ditto above, although an interest blend of pondskimming humanity and Catholicism.

In the MSOB. First published in Interzone, 1996.

Back to the alternate space reality, and collected in Dozois 14th, as a geriatric astronaut relives his halcyon days.

A prolific writer who delivers the goods pretty much all of the time. You can get copies of ebay for one a few pence (or cents), so grab a copy, and dip into it from time to time (which is probably a better way to read it than straight through, due to several of the stories having similar themes).