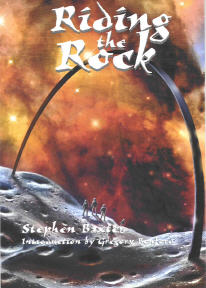 I mentioned recently that Di Filippo’s ‘A Year in Linear City’ had set PS Publishing a high standard to maintain.

The story is one in Baxter’s Xeelee sequence, and does benefit from awareness of other stories, although this is not crucial. Baxter is a one of a (worringly) rare breed of SF writer – someone who is at ease with a galaxy- and millennia-spanning vision. This story takes place some tens of thousands of years after the previously PS-published ‘Reality Dust’ (reviewed below), and the Interzone-published ‘Cadre Siblings’ ([reviewed here]). If you nip over to the Best SF Gateway you will find links to a couple of Xeelee stories which are online – try the ‘On the Orion Line’ if you aren’t familiar with this story sequence.

Here Baxter looks at the price humanity has to pay to defend itself – to protect ourselves a species. But if we lose that which it is to be human in the process, then we have lost ourselves as a species even if we win the war.

Not the longest novella (in fact only a longish short story), but it packs a punch. This is a volume which would grace any SF reader’s shelves.

A teeny, weeny quibble though. In the space of a couple of pages Baxter talks about something being ‘not metres away’ – a clumsy phrase to read once, and to read twice in such a short space of time was a bit of a jangle. .